The religious cult and its main character is the Death Face, which has its roots in Aztec culture and has found its home in Mexico. This tattoo is very popular in California and, of course, in Mexico. What it is, what history it has and what it means further in the article.

The history of the appearance of the image for a tattoo

According to myths, once upon a time people were burdened with their endless life, and tired of this, they asked God to grant them the opportunity to be mortal. Then God appointed one of the girls to be death, after which she lost her body and became an intangible spirit that took life.

In Mexico, she was revered as a saint. It is believed that it protects against mortal wounds and sudden death. And it helps girls to bewitch their beloved or return a walking husband.

What does Santa Muerte tattoo mean for men

The image of a girl, in the image of death, was at first in vogue among criminals, it helped them avoid wounds in fights and avoid death. That is, it served them as an amulet. This image is credited with supernatural powers that protect the wearer. Later, however, it was completely pumped into the general masses. And the amulet also mattered.

What does Santa Muerte tattoo mean for women

The female half of the peoples of Mexico most of all believes in the love powers of such a tattoo. Such a tattoo helps a girl get the man she wants.

However, in addition to their expressed qualities, Santa Muerte is, above all, a story that has been passed down through generations that carries a cultural footprint.

There are many options for such a tattoo, but most often they will invariably depict a girl's face, with down-eyed and resembling a skull. She can be depicted with a crown, in a fiery red vestment, or with a face speckled with flowers and curved lines. Or imagine her in the form of death with a scythe.

Such a tattoo does not have a favorite place, for her every part of the body is preferable.

She can be depicted: 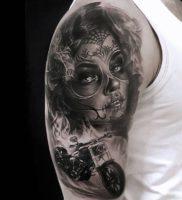 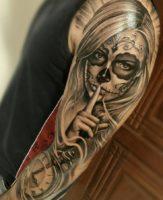 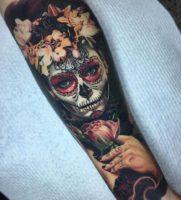 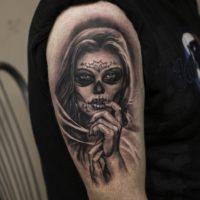 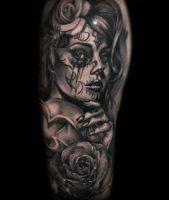 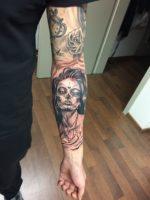 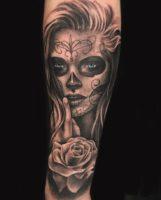 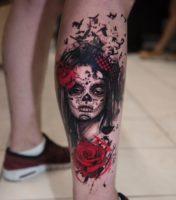 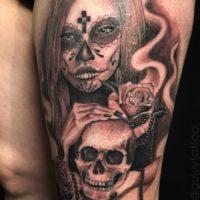 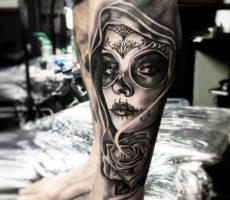 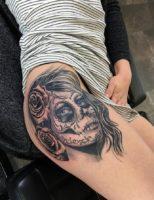 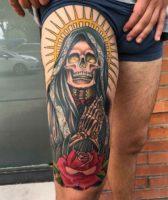 More on the topic:  The meaning of a ballerina tattoo 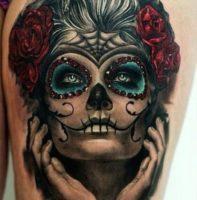