Translated from the Icelandic language, the word "vegvisir" means "signpost". This rune compass can be attributed to ancient magical symbols, it denotes both a helmet of horror and a sea becoming. It is also a very powerful amulet with great power.

According to beliefs, he is able to guide a person on his true path, that is, help him find his way even in the foggy thickets. That is why, this sign was often used by many sailors, travelers and even powerful warriors - the Vikings, to protect their ships. From himself, the vegvisir is a cross with eight ends, on which marvelous runes are located. The earliest mention of this sign is found in records dating back to the XNUMXth century in the Hulda Manuscript. There was no other mention of this direction sign.

Moreover, this compass has a supernatural meaning. They say that he can protect from evil thoughts not only his owner, but his entire family. It can activate the energy of life, help its owner to make the correct alignment of values ​​in life. A signpost can still help fulfill girlish desires.

Recently, Scandinavian mythology has been especially popular among those who want to get a tattoo on their body. Many people believe that a tattoo depicting a mighty compass can reward its owner with determination, loyalty, and courage. It can also build self-esteem and get rid of complexes.

The meaning of the Vegvisir tattoo for men

In ancient times, such a talisman was used mainly by males. The main reason was that determination and willpower were unique to men. With this tattoo, you can emphasize courage and the ability to go through adversity.

For men, this tattoo symbolizes:

The meaning of the Vegvisir tattoo for women

Despite the fact that since ancient times this sign was considered exclusively a symbol of the male sex, today a tattoo depicting a vegisir is popular among women who are distinguished by their strong-willed character. For women, the image of this compass also symbolizes happiness in their personal life, and it is also a female amulet that helps to achieve stability and harmony.

For women, it symbolizes:

A tattoo depicting a runic compass is suitable for almost any place on the body: for the chest, back, shoulders, forearms, arms, elbows and other areas. However, in order for the "amulet" to actually work, they say that it must be applied to the hand or forearm.

Photo of Vegvisir tattoo on the body

Photo of Vegvisir tattoo on hand 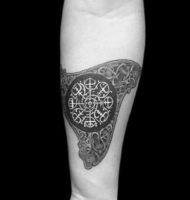 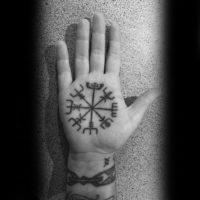 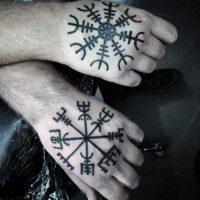 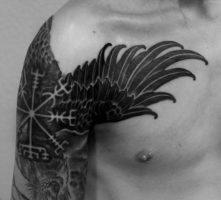 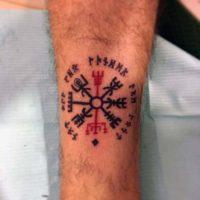 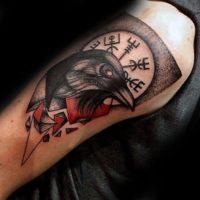 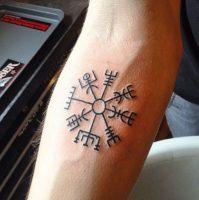 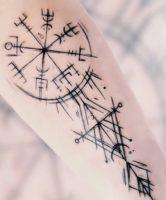