What associations do you usually get when you see a giraffe? Of course, positive - this graceful animal conquers with its size, regularity of movements, extraordinary color. The giraffe tattoo also causes similar associations.

Nobody remains indifferent to such a picture. Everyone wants to take a closer look at everything, to see where the long neck of the animal rushes.

And although a giraffe in the form of a tattoo is most often found among representatives of warm countries where this animal lives, there are also many fans of this exotic beast in our country.

It is not difficult to explain such popularity - you cannot find an animal more good-natured. Giraffes have excellent contact with people, get along with each other, and protect their relatives. Such qualities cannot but appeal to people.

The meaning of the giraffe tattoo

For Africans, the giraffe is a totem animal, therefore it is treated with special respect and worship... The unique coloring of the animal is never repeated, as is the pattern of our fingerprints.

The relationships of animals are no less unique - they are quite peaceful, they never show aggression, they are attentive to all surrounding objects. In this regard, this plot can be compared with a raccoon tattoo.

Such habits have found their positive reflection in the giraffe tattoo - the meaning of such a pattern cannot be negative and evil. Rather, on the contrary, such a drawing will attract to its owner. prosperity, happiness and good luck... And it will also become a kind of amulet against evil forces, failures and defeats.

Best of all, a spotted pattern is suitable for people with a balanced character, good nature, an active life position, nobility, cheerfulness. Moreover, this applies to both men and women, because the giraffe will look attractive both on a slender female body and on the muscular figure of a man.

More on the topic:  Tattoos that bring good luck and money

Considering the sketches, it is impossible not to pay attention to the images from animated films - they are so beautiful and positive that they give odds to realistic images of a giraffe in the bosom of wildlife. As always, everything depends on the individual preferences of the person.

Given the elongated shape of the giraffe's neck, its image will look spectacular on the legs and arms, but can also be applied to the back, sides and chest. On light and dark skin, the spotted pattern looks equally impressive.

Photo of giraffe tattoo on body

Photo of a giraffe tattoo on the arm 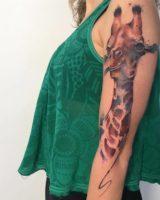 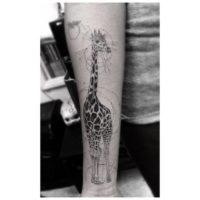 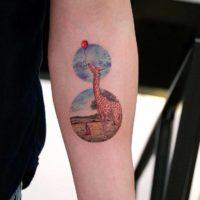 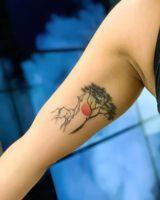 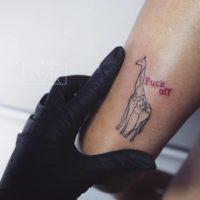 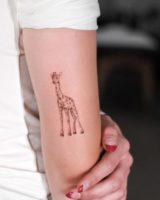 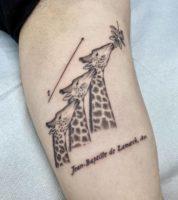 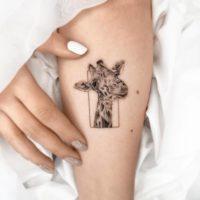 Photo of a giraffe tattoo on the leg 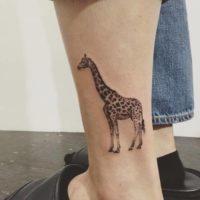 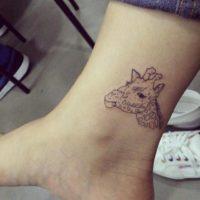 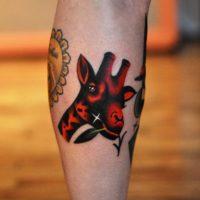 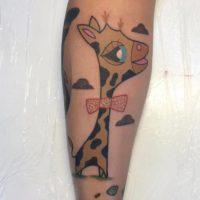 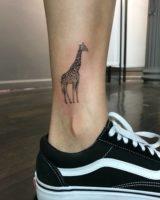 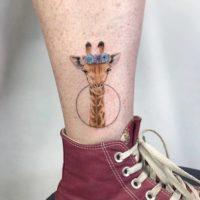 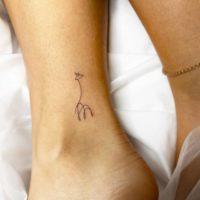