In ancient times, all peoples, without exception, worshiped deities and spirits who guarded them and their property, were responsible for natural phenomena, bestowed mercy on those who deserved it, and punished for offenses.

A person cannot exist peacefully without explaining the reasons why certain events occur in his life and in the world as a whole. Therefore, each nation has created its own pantheon of gods and the theory of the universe. However, it is noteworthy that, although deities are called differently in different cultures, they perform the same functions.

This suggests that regardless of living conditions, place, cultural characteristics, in general, ancient people saw the world in about the same way. Tattoos depicting divine symbols were already not uncommon in those distant times.

Today we will talk about the Veles seal tattoo, the functions and features of the image of God himself.

Beliefs of the ancient Slavs

Ancient Slavic sources mention Boyana, a famous singer. He is called the grandson of Veles. Therefore, it is believed that he also takes care of people with strong creativity.

Despite all his positive qualities and power, Veles was expelled first from Prav, where the gods live, and then from the world of people, as a result of which he had to go to Nav. The reason for this is feud with Perun, from whom Velez took his wife. Yes, even gods are not alien to human passions. According to one version, the werewolf kidnapped the goddess Dodola, according to another, she herself was not averse to leaving her husband. Perun returned his wife and punished, and expelled Veles from the divine world. However, from the union of Dodola and Veles, the sun god Yarilo was born.

More on the topic:  Temporary tatoos

Then the great sorcerer went to wander among people and began to teach them all kinds of crafts. However, later he was expelled from the human world to Nav, where he took another wife for himself.

From this story, we can conclude that the attitude towards Veles was ambiguous: he was revered for wisdom, but they were afraid of his strength, which appeared as a result of the merger of light and darkness.

Velez in a tattoo

So, what does the God Veles tattoo mean in modern tattoo art?

Image of a werewolf god in a tattoo

Veles tattoo is a Slavic amulet that helps to gain financial well-being, to achieve success in creativity. The symbol of Veles, a tattoo with which basically looks like a wolf or bear paw, is designed to protect people of creative professions, farmers and people who are fond of esotericism.

The wise god is mainly depicted as a gray-haired old man with a staff, wrapped in a bearskin. A traditional Slavic ornament, a forest landscape with howling wolves is often used as a background.

More on the topic:  The meaning of the tattoo fire, flame

Of course, a realistic image will look the most impressive regardless of whether you choose a god in human form, a Veles paw tattoo or his idol on an ancient temple.

Celtic will also be very appropriate. Perhaps it sounds illogical, because Slavic patterns are significantly different from Celtic ones. In this case, we are more concerned with the aesthetic component, and hardly anyone would deny that a Celtic ornament made by a talented craftsman can look simply gorgeous. If, nevertheless, to touch upon the topic of differences between ethnic groups, then there are not so many of them as it seems, besides, every modern nation is a mixture of all ethnic groups that have ever inhabited a certain territory.

The most suitable places for a tattoo with the image of Veles are the shoulder and back, because such work involves a large scale. If you prefer the paw print symbol, then almost any place on the body is suitable for it.

Photo of Velez tattoo on the body

Photo of Dad Veles on his hands 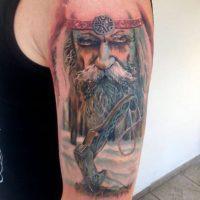 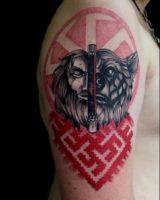 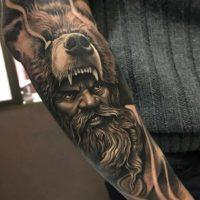 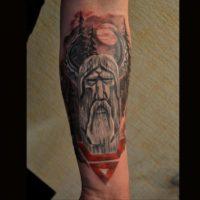 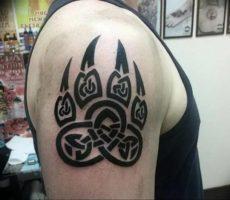 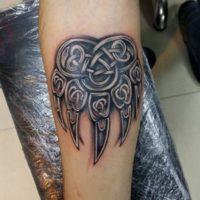 Photo of Dad Veles on his feet 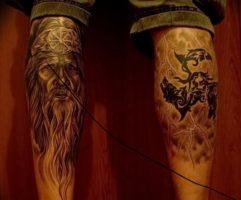 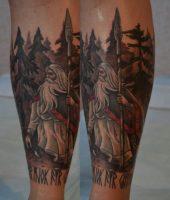 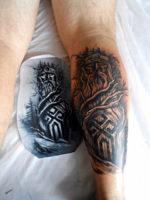 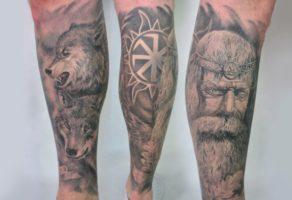 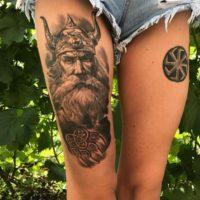 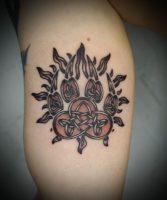 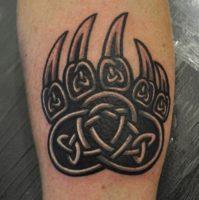