Modern youth often choose an image of a Valkyrie for a tattoo for its beauty and sophistication. Not many people have an idea that this is a powerful sacred Slavic symbol of Scandinavian origin.

Valkyrie combines the main qualities that a real warrior needs. it honor, wisdom, nobility and justice... The symbol of the Valkyrie carries the patronage of those who are fighting for their kin and land. Valkyries smooth out the negative sides of the war, taking care of the balanced spirit of the warriors. But the Valkyrie does not carry only a peaceful meaning. She personifies the human right to protect their foundations. Valkyrie as a tattoo has the meaning of militancy and strength.

The Valkyries became famous for their mythology. The myths describe beautiful and brave virgins. They were honored by warriors who fought for their land and faith. The Valkyries were in the retinue of the god Odin. They took the souls of dead soldiers to his castle and served them there during the feast. Each Valkyrie was responsible for a specific moment in the battle.

It was believed that the Valkyries influenced the fate of a person from his birth. The Valkyries were the beloved of the great warriors - Velend, Siegfried, Helga. In the Middle Ages, during the witch hunt, women were often recognized as Valkyries, that is, witches.

Initially, these mythological maidens were considered the sinister spirits of military battles. The Valkyries, flying over the battlefield on behalf of Odin, determined whether a soldier should live or die. Later, the Valkyries began to be referred to as romantic and beautiful creatures with golden hair and snow-white skin. They often fell in love with mortal heroes. Over time, the Valkyries were increasingly endowed with the fate and appearance of real women who lived in Scandinavia at that time.

Among the warriors there was a belief that if you pray to the gods and go into battle honestly, then the maiden-Valkyrie will deliver the dead brave men to meet the god Odin. Odin's assistants carried away only the most worthy from the battlefield. Those who were not honored with their attention are forced to live in the underworld in ordeals and torments.

More on the topic:  The meaning of the Kolovrat tattoo

Some of the myths present to us the Valkyries flying on the wings. Other legends speak of Valkyrie riders who ride horses from the clouds. That is why the wings of the Valkyrie are so popular to depict on tattoos.

The world learned about the Valkyries thanks to the monument of ancient literature "The Elder Edda". In the poem, each Valkyrie is called by name, which determines her character and essence. In translation, all these names are associated with militancy.

According to Anglo-Saxon legends, some Valkyries come from noble families who were chosen by the gods. Other maidens are descended from elves. Girls prefer tattoos in the form of Valkyries, having read the Germanic epic "Song of the Nibelungs". One of the parts of the work describes the punishment of the Valkyrie Sigrdriva, who dared to go against the will of the god Odin. One plunged the Valkyrie into a deep sleep. After awakening, the virgin lost her immortality and became an ordinary woman.

For girls, the Valkyrie is a tattoo that acts as a talisman that strengthens spiritual strength and helps to unleash potential.

If you liked the idea of ​​getting a Valkyrie tattoo, you can find sketches on the Internet or browse albums at a tattoo parlor. An experienced specialist will masterfully draw the tattoo you like.

Photo of Valkyrie tattoo on the body

Photo of Valkyrie tattoo on hand 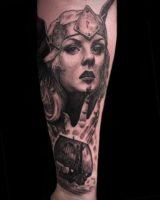 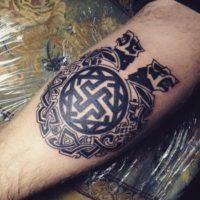 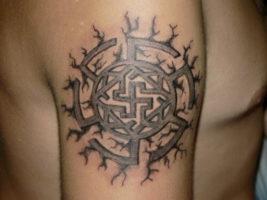 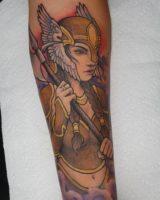 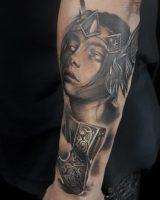 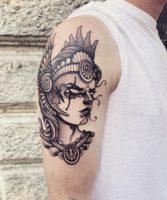 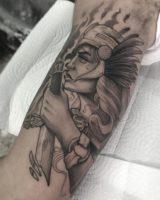 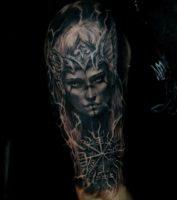