The meaning and symbolism of a nun tattoo. Let's take a look at what it means to depict a girl who renounced worldly life and seeks reassurance in spiritual service.

The meaning of a nun tattoo

A nun is a girl seeking spiritual enlightenment and union with higher powers. She is distinguished by modesty, meekness and solitude. Previously, nuns lived remotely from society and rarely interacted with them. Therefore, the image of a classic nun means:

For the stronger sex, such a tattoo can mean his belonging and sympathy to religion. Express his altruistic impulses, humble behavior, strong spiritual development. Such a tattoo shows that his bearer is strong in body and spirit, but he will not behave defiantly and be proud of it, but will follow his goal confidently and quietly.

Girls can express with such a drawing their chastity, modesty, faith and belonging to a highly spiritual society. The nun radiates a strong will and a soft, kind appearance. And we can say it expresses: "a soft word - the bone aches."

Adding other elements, exposing the virgin in a different setting completely or partially changes the meaning and message that carries in itself. For example:

More on the topic:  Tattoos from dusk to dawn

Places of tattooing a nun

This tattoo has many modifications, types, sizes, related items. Therefore, it can be applied on the following places:

Photo of a nun tattoo on her body

Photo of a nun tattoo on her hands 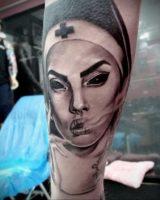 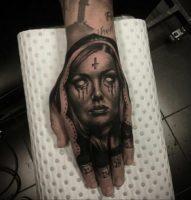 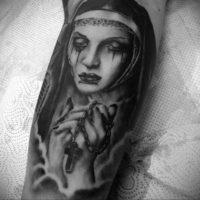 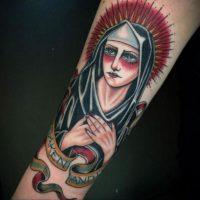 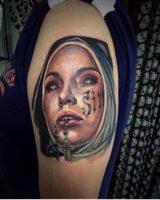 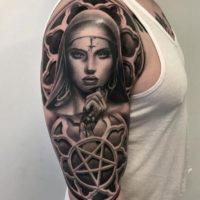 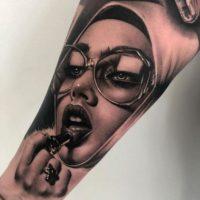 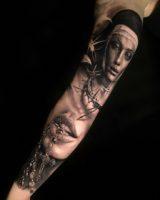 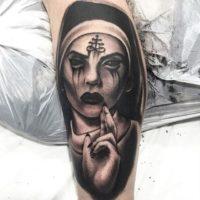 Photo of a tattoo of a nun on her feet 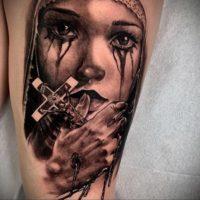 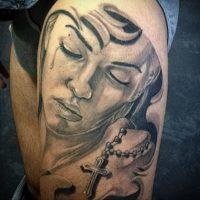 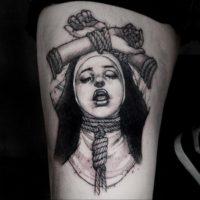 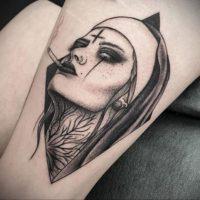 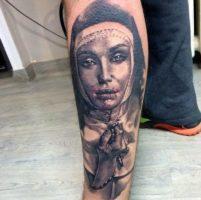 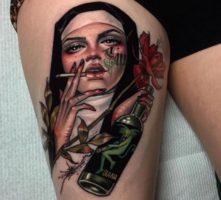