The image of the spiral can be found in ancient tattoos. It can be seen in fingerprints, DNA molecules, in mollusk shells, in whirlpools and tornadoes, in cosmic galaxies. It is both a simple and complex figure. Spiral symbolizes vital energy, cyclical development, some predictability and impossibility to change anything.

The meaning of the spiral tattoo

Spiral tattoo has many meanings. It symbolizes the seasons, growth and aging phases of the body, development and decline. Many connoisseurs of tattoo art believe that a curl immortalized on the body can make a person calmer and more judicious, and improve the functioning of many body systems. From the point of view of a philosophical approach to life, the curve carries a connection with space, cyclical development of nature and civilization. The balance of opposites is also included in the meaning of the sign. The whole philosophy is built on this basis. yin and yang... The compressed spiral in tattoo culture symbolizes hidden strength, energy and development potential.

Spiral tattoo is depicted in a realistic style or has a stylistic performance. It can also consist of individual words, phrases or a set of numbers that play an important role in a person's life. The symbol is simple enough to perform and has no gender. Conciseness and versatility - the main distinguishing features of a tattoo. The colors for the image can be different - from standard black to bright colors.

The sizes of the tattoo can be of any size. Small tattoos are often applied to the back of the neck or wrist. The tattoo on the shoulder also looks attractive. Several spirals may be depicted on the body. The drawing looks interesting, the center of which is on the elbow. The galaxy drawn on the shoulder looks stylish.

More on the topic:  Photos tattoo lettering on the wrist

Photo of a spiral tattoo on the head

Photo of a spiral tattoo on the arm 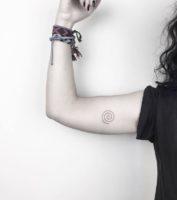 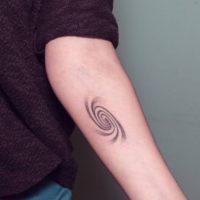 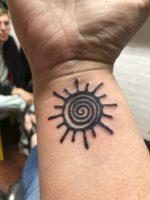 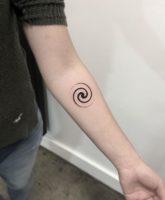 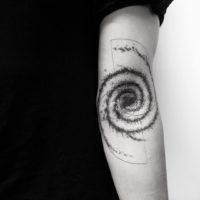 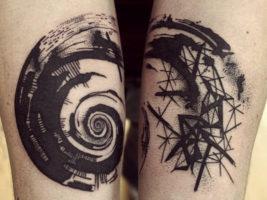 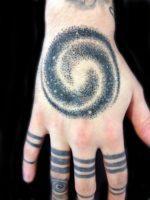