The word "solstice" comes from the Old Church Slavonic language and means the solstice. This day of life is very important for the ancient Slavs. They celebrated this day as the celebration of the birth of the sun.

The Slavs were in awe of all the elements of nature, and they especially revered the sun. The pagans worshiped the sun, considered it to be the center of everything and the basis of being. The life of the Slavs depended heavily on the sun, on its cycles, on weather conditions, which is why all the forces of nature were sacredly revered.

Solstice is one of the most ancient sacred symbols of the Slavs. It is depicted as a circle with curved rays.

The basis of being is the seasons, which are replaced by the way the sun turns around. The heavenly body was considered a symbol of fertility and the beginning of all living things. Solstice symbolizes constant movement and variability, creation, life cycles that are constantly changing.

The meaning of the solstice tattoo

The meaning of a solstice tattoo depends on how many rays are depicted on the tattoo. Four rays symbolize heavenly fire, six rays - the symbol of Perun, the supreme deity of the Slavs, eight rays reflect the forces of the fire of the Sun.

Solstice is most likely the only tattoo that differs significantly in male and female versions. The difference is in which direction the rays are directed. In women, the rays are located clockwise, and in men, vice versa. In the first case, the tattoo symbolizes growth, improvement, a new stage in life. For men, a tattoo is a symbol of masculine energy, a return to the beginning. It is believed that such a tattoo can increase masculine strength.

Places of application of the solstice tattoo

Black paint is predominantly used for tattooing, but there are options with white or red rays. The drawing can be simple or contain additional patterns and ornaments. The application of the solstice does not take much time. The tattoo looks best on the chest, back and shoulder. Much less often, a tattoo is applied to the neck.

More on the topic:  Photos of tattoos "Appreciate every moment"

The image of the sun is a powerful talisman that protects the wearer from adversity and misfortune, helps to find a way out in difficult situations, gives strength and vitality when it is especially necessary. It is believed that the solstice tattoo protects fragile happiness and helps to strengthen it. The symbol of masculine and feminine principles contributes to the development of harmonious and happy relationships in the union.

Photo of solstice tattoo on body

Photo of solstice tattoo on hand 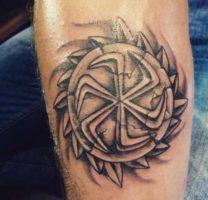 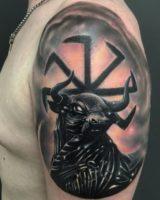 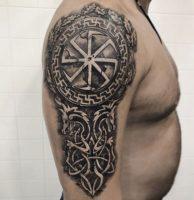 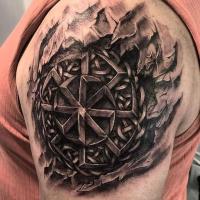