One of the most popular inhabitants of the aquatic world, which are used in body painting, is the stingray tattoo. The fish is endowed with interesting characteristics.

The dweller of the depths is able to change color, adapting to the environment. Stingrays are able to survive at a depth of 3 m. Some species have a specific weapon - a special organ that is capable of generating electrical discharges. The marine life uses this weapon only in case of danger. The rest of the time it is a calm fish that does not attack first.

The meaning of the stingray tattoo

Stingray is often used in tattoos. According to fans of the art of body painting, the meaning of the stingray tattoo is as follows. it striving for freedom and independence, calmness and poise, which in the event of a threat develop into aggression and danger, the ability to quickly adapt to the environment and survive in any conditions.

Stingray tattoos are chosen for themselves by both men and women. It is believed that a marine inhabitant is able to become a kind of amulet and amulet for its owner. Tattoos are most often done in the Polynesian style or in realism. The choice of color and the availability of additional components depend on this.

В Polynesia stingray tattoo is considered one of the most commonly used subjects. The tattoo consists of various patterns and elements that, in general, resemble a stingray. Most often, the work is done in black. The upper part serves as an amulet to attract good luck. In the center is a hibiscus or any other symbol that suits a particular person. The tail of the fish serves as a kind of weapon that can detect and ward off trouble from the owner of the tattoo. The stingray tattoo on the back looks the most interesting and stylish.

The skat can also be performed in the style of realism. In such a situation, colored paints are used. The composition is complemented by turtles, fish and other inhabitants of the sea.

More on the topic:  Amulet tattoo

Photo of stingray tattoo on the body

Photo of daddy skat on his hands 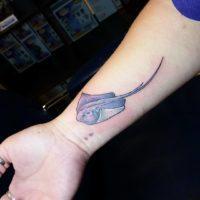 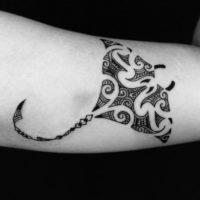 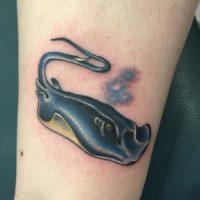 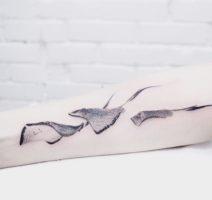 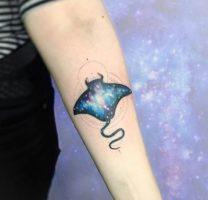 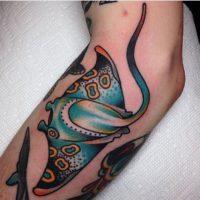 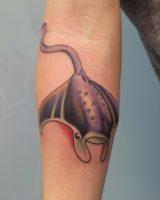 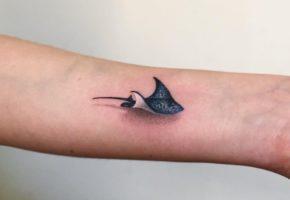