A tattoo is not only a drawing on the body for life. Depending on the value of the selected image, it can change a person's life. Body designs have been popular since ancient times. The ancient Egyptians left an image of a scarab beetle on the body in order to be reborn to a new life after death.

The scarab is a type of dung beetle that lives mainly in sandy areas. One of the varieties, the sacred scarab can be found in Egypt. It became sacred for a reason. The ancient Egyptians noticed that beetles lay their larvae in an even ball, which they form by rolling, after which they bury it in the ground and roll it to the water at a suitable time so that offspring appear there.

The main thing is that the direction of movement in this case follows the path of the Sun - from east to west and resembles it in shape. Therefore, this insect began to be identified with the Sun, new life and became a sacred symbol. God Khepri was depicted with a head in the form of this beetle.

According to Egyptian ideas, this insect was born from the sands of the desert, and unlike other small living creatures that emerged from the waters of the Nile. Talismans in the form of him are still popular in Egypt.

The meaning of the scarab tattoo

Previously, the scarab tattoo was popular among priests or rulers so that they could be reborn in a new life. Now anyone can portray her. A sketch of a scarab beetle tattoo can be simply in the form of the insect itself, or in the form of a classic Egyptian amulet. For those who are not familiar with the ancient culture of this hot country, such a seal on the body will seem unpleasant.

More on the topic:  Photos tattoo lettering on the spine for girls

The meaning of a scarab tattoo is actually very deep. As a sign of the Sun, it gives its energy and helps its owner to achieve more. Symbolizes rebirth, spirituality. For those who truly believe in its power, the sacred beetle will become a powerful talisman.

According to the eastern people, the scarab beetle tattoo, as a talisman, has the following meaning:

Such a tattoo is suitable for spiritual people, stubborn, striving to achieve results in any area. It connects a person with the afterlife, symbolizing the immortality of the soul, rebirth.

If you don't know which place is best for such a tattoo, check out the photo of the scarab beetle tattoo. Small tattoos can be placed on the neck, behind the ear, on the arm. Large scale paintings look great on the back. Any place commensurate with the size of the picture is suitable for the image.

Photo of scarab tattoo on body

Photo of scarab tattoo on head 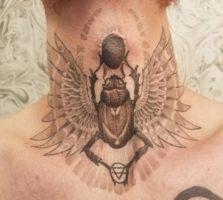 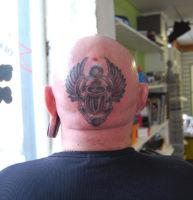 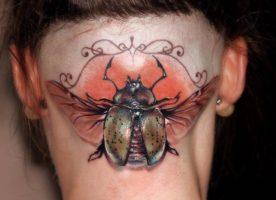 Photo of scarab tattoo on hand 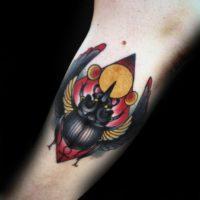 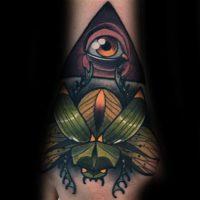