The steering wheel is a typical maritime symbol. He is responsible for choosing the right path... This is precisely where its symbolism lies. The rudder is often used in tattoos by people who are even slightly associated with the sea. According to legend, the steering wheel tattoo was a talisman for sailors and protected them from choosing the wrong path. From the category of professional tattoos have migrated to the public.

The meaning of the wheel tattoo

This symbol is mainly applied by men. The meaning of the wheel tattoo is that the symbol is responsible for the correctness of the decisionI am. It is often applied by purposeful individuals who know what they want out of life. A person chooses his own path and follows it exactly, while he himself is responsible for his actions. Belonging to the marine theme does not deprive the owner of the tattoo of a penchant for change, wanderings, travel.

Placement of the steering wheel tattoo

The tattoo is depicted both without additional details and as an integral element of the composition. In addition to the rudder, an anchor or rope is often depicted, ribbon inscriptions characteristic of the old school style, and occasionally roses. The tattoo is done both in color and monochrome. Good location - on the shoulder, back, arm. The wheel tattoo is popular with people who know what they want from life and confidently achieve it. 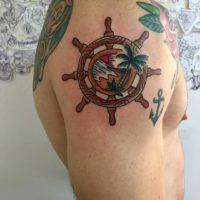 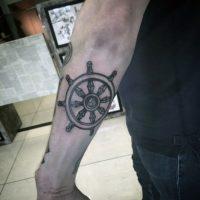 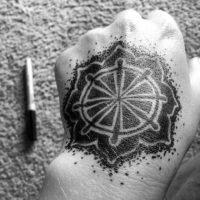 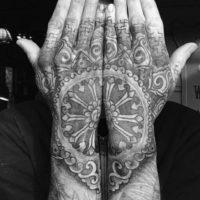 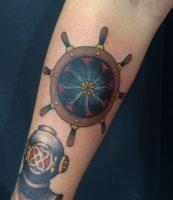 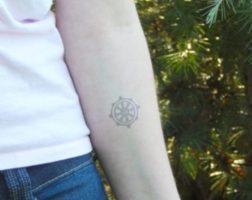 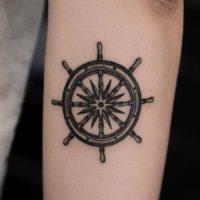