Many fans of tattoo art choose for themselves those images that can emphasize the strong qualities of their character, their aspirations in life.

Usually these are representatives of the animal world, because our ancestors endowed almost each of them with a special symbolism, which is still alive in our minds to this day.

However, there are enough originals who do not want to be content with the already familiar wolves, tigers, eagles and owls and choose images of rather unusual animals as sketches, for example, a hammerhead, the meaning of a tattoo with which we will discuss today.

The origins of symbolism

The hammerhead fish or hammerhead shark lives in the temperate and tropical waters of all oceans. The body of these sea predators can reach a length of 7-8 meters. If we talk about how representatives of ancient cultures and modern people treated it, you can hardly find a difference between this shark species and the rest.

However, some adjustments still introduce behavioral features uncharacteristic for other shark species and, of course, such an eccentric appearance.

If you ask a European, Chinese and Hawaiian about what associations a shark evokes in them, the answers will definitely be different. The inhabitants of the Celestial Empire, for example, have always appreciated shark fins, considering them a powerful aphrodisiac, an agent that gives tone to the body and strengthens the immune system.

The islanders saw in these mighty predators from the depths of the sea their patrons, deified them, worshiped them.

Hollywood has become the culprit for the fact that sharks are associated with the most dangerous animals, which, as soon as they see a person, immediately rush at him and tear him to shreds. In fact, people do not enter the usual diet of sharks, they attack mainly when they feel danger, simply guided by an innate instinct for self-preservation.

More on the topic:  The meaning of a dragonfly tattoo

But it is worth noting that with regard to hammerhead sharks, the directors of Hollywood blockbusters are still right in some way: this type of shark is indeed much more aggressive than all the others, therefore the meaning of the hammerhead tattoo is unambiguously associated with aggression.

By the way, a mystery is connected with these creatures, which scientists still cannot solve. Hammerhead sharks are able to gather in huge schools in underwater rocks, and these gatherings reach their apogee by about noon, and by the evening the predators disperse about their business. It is also surprising how well the hammerhead shark navigates even in troubled waters. There is an assumption that its brilliant navigational abilities are due to the ability to orientate using the Earth's magnetic field.

Although the designation of a hammerhead shark tattoo seems intuitive, it is still worth considering in more detail what this sea predator can tell about its owner:

Hammerhead tattoos are equally well suited for girls and guys, because this predator symbolizes those qualities of character that can be characteristic of any person, regardless of gender, social status and worldview. However, more often sketches with these underwater inhabitants are still chosen by men.

The colorful sleeves with the image of seascapes look very cool. The hammerhead shark can act as the center of the composition when algae sway around against a blue background of water, corals scarlet, starfish lie at the bottom, and small bright fish, stingrays and translucent jellyfish swim by.

Realism is a rather difficult style to perform, so such work can cost a decent amount, and you should only turn to a really experienced and talented master. In addition, work on the sleeve can take several months due to its scale, but in the end you will become the owner of a bright and original tattoo, which will be admired by everyone who sees it.

The nautical theme is also often played in old school and new school styles. Clear wide contours, bright colors and relative simplicity of the image will make the tattoo concise and visible from afar, while not requiring a lot of body space. If old-school tattoos may seem too primitive to someone, then you can't say that for a new school. A shark can be depicted in a completely unusual color palette, even made anthropomorphic by placing a vintage top hat on a fancy head, enclosing her portrait in a vintage oval frame.

Fans of monochrome works should take a closer look at Polynesian tattoos. Such images are not oversaturated with a lot of details, the ornament is usually quite simple, but the tattoo looks bright and catchy. In addition, given the attitude of the islanders towards these underwater predators, the tattoo can take on a deeper meaning.

More on the topic:  Photos tattoo inscriptions on the ankle for girls

Photo of hammerhead tattoo on body

Photo of hammerhead tattoo on hand 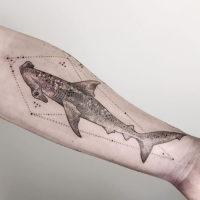 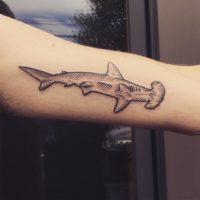 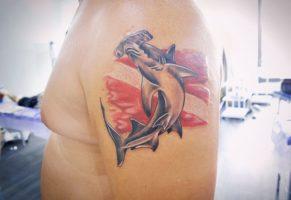 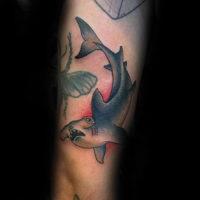 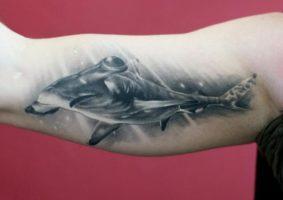 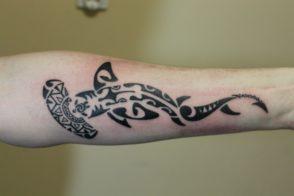 Photo of hammerhead tattoo on leg 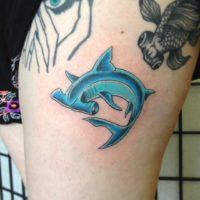 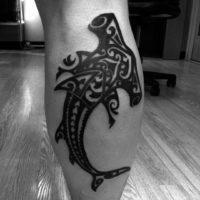 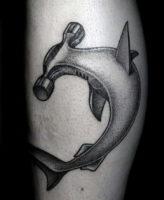 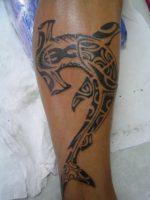 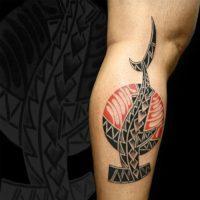 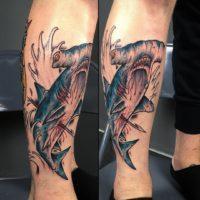 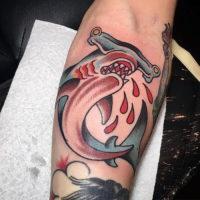