In this article, we will consider the meaning of a bullet tattoo.

Who gets the bullet tattoo?

This small deadly object is often used in their works by poets and writers. It is often drawn by artists, making it even the central element of the whole picture. Unsurprisingly, the bullet is common in tattoo art as well. Such a pattern on their body is most often preferred by men. In particular - those who are associated with the army, military service. The tattoo allows you to show the courage of a man, his strength and fearlessness.

But women can also choose a tattoo that has an image of a bullet. Most often, such a pattern on a woman's body speaks of the straightforwardness of the owner of the tattoo.

What does a bullet tattoo mean for a man?

By the way, not only the image of the bullet itself is suitable for the described decoding of the tattoo, but also the traces that it left. On a man's body, such a pattern means:

The military most often choose a simple tattoo - a black and white image of a bullet, without any additional images, variations, etc.
But people who have chosen another professional path can apply large-scale drawings or compositions that include a bullet to their bodies. But in any case, such a drawing indicates a certain straightforwardness of character, strength and courage.

What does a bullet tattoo mean for a woman?

It would seem that such a pattern is the choice of exclusively men. However, representatives of the weak half of humanity do not so rarely choose a bullet for a tattoo.

More on the topic:  The meaning of the Kolovrat tattoo

The meaning of such an image on a female body is as follows:

Of course, a tattoo can indicate that a woman belongs to the army. But not always.

There are quite a few variations on the body image of the bullet. Some people prefer a simple tattoo that clearly shows the bullet.
Others choose a more "brutal" pattern - traces of "wounds" left on the body. Often, blood seems to flow from such "traces". But this variation is somewhat extreme, it can even cause a certain shock to others. But doesn't a real daredevil care what these "cutesy" little people and "sissies" think of him?

Another great option is a tattoo that depicts a bullet in flight. She can often be portrayed in a somewhat comic animation version. The bullet can even have eyes and hands drawn.

But most often, the bullet tattoo is depicted in such a consistently popular style as old school. The colorfulness and brightness of the picture make it incredibly attractive.

This tattoo looks great on virtually any part of the body. Naturally, if its dimensions correspond to the dimensions of the body part. In particular, a bullet can be "stuffed":

Photo of bullet tattoo on head

More on the topic:  Pulse tattoo

Photo of a bullet tattoo on the body 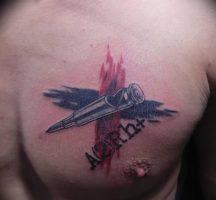 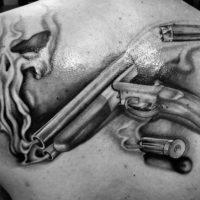 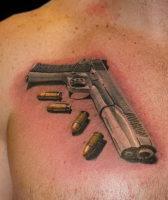 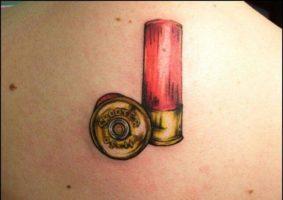 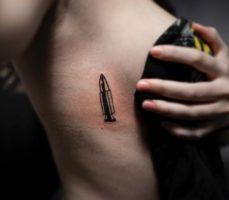 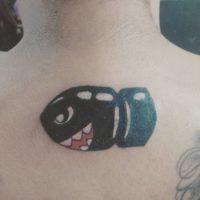 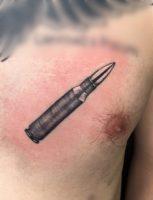 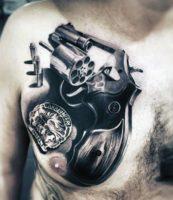 Photo of a bullet tattoo on the arm 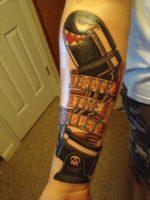 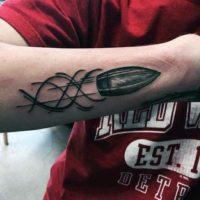 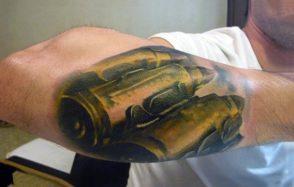 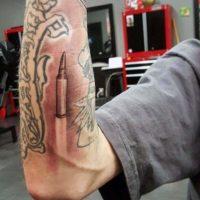 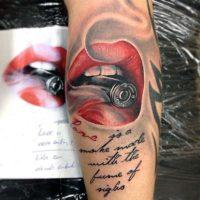 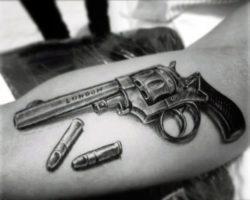 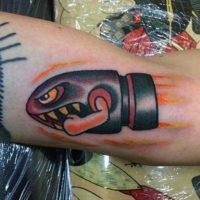 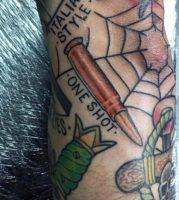