Perhaps the pirates are the most controversial personalities in history. They were admired, they were feared, but they were never treated indifferently. Pirate tattoos subconsciously evoke an association with violence, permissiveness, robbery. A person with such tattoos seeks to get the most out of life with a minimum investment of time, labor, and financial resources. The corsairs relied entirely on fortune. Therefore, the owner of the tattoo is used to relying not on his own strength, but on chance.

The meaning of the pirate tattoo

The image of the corsair can also be used in tattoos if you give it a humorous character. Mostly this is a man's tattoo, but there are girls who put similar pictures on the body in order to show their rebellious character. Pirate tattoos gained popularity among people after the release of the movie "Pirates of the Caribbean", which reflects the romance of a free life without attachments.

This tattoo is mainly applied to the back. Most often, the tattoo is large, which betrays the seriousness of the owner's intentions. You can find both monochrome and color sketches of pirate tattoos. The more serious and scary the picture, the more aggressive its owner is. More often than not, like attracts like. You can find interesting variations with the image of a pirate ship with black sails and various variations on the theme of crosses and skulls.

In conclusion, it is worth summing up: the meaning of a pirate tattoo is rather negative, because it means a person's tendency to look for easy ways and ways of making money, and also rely on chance.

More on the topic:  Photos tattoo lettering about happiness

Photo of pirate tattoo on body

Photo of pirate tattoo on hand 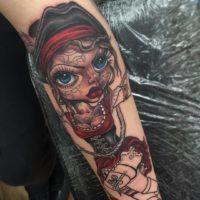 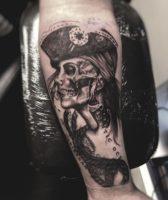 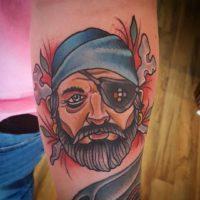 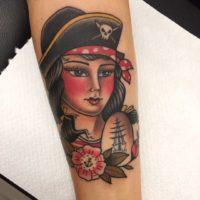 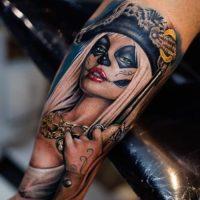 Photo of a pirate tattoo on the leg 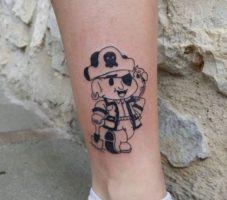 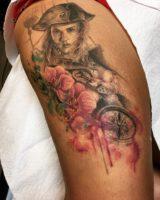 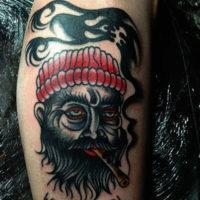 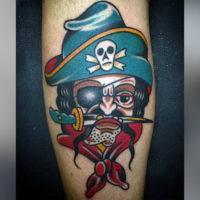 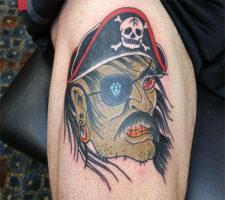 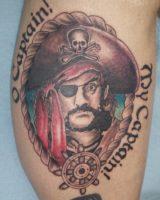 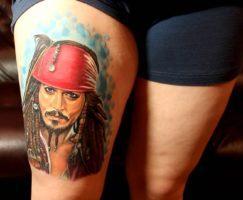 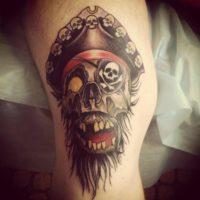