Piranha is a very dangerous predatory fish. It is noteworthy that they swim in flocks. Usually fish tattoos have a positive energy. Wealth, luck, prosperity are associated with them.

In some countries, fish symbolize the souls of deceased relatives. However, piranhas cannot be equated in semantic meaning with other fish. Piranha is characterized by powerful jaws and dangerous teeth.

These predators are able, having gathered in flocks, to demolish everything in their path. it symbol of destructive and all-consuming power.

The meaning of the piranha tattoo

The image of a predator is suitable for people who have a strong-willed character and a tendency to overcome any obstacles. It is also a symbol of a physically and mentally strong person. Determination and perseverance allows such people to achieve heights, both in the professional sphere and in their personal life.

They will stop at nothing until they get their way. It is difficult for such people to argue. They do not understand rejection, and it all comes down to the fact that a person gets what he wants, in spite of everything.

Digging deeper, piranha is considered a kind of protector of motivated individuals. Such tattoos are not suitable for people who do not have pronounced leadership data.

The fish can be depicted from different angles. To emphasize as much as possible determination and ability not to give in to difficultiesstuffed with piranha with an open mouth. The aggressiveness of the fish, its readiness to attack will indicate that everything will be as the man with the piranha wants.

It is not customary to portray a flock of piranhas. This is a purely masculine tattoo. The shape and color may vary. Piranha tattoos are applied on the shoulder, forearm, lower leg, less often on the back. The meaning of such a tattoo is to push its owner to reach new heights, while demonstrating to others that it is useless to contradict

Photo of piranha tattoo on body

Photo of piranha tattoo on hand 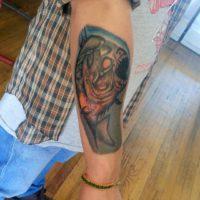 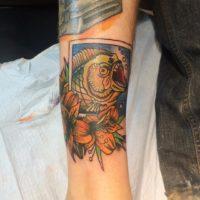 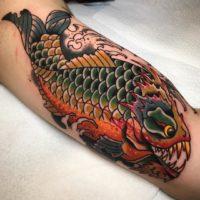 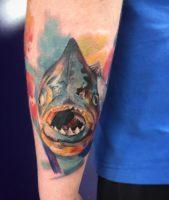 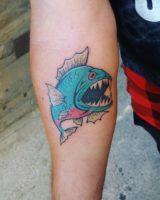 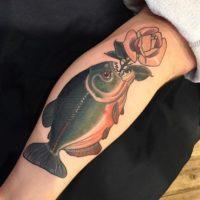 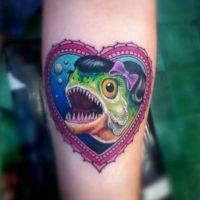 Photo of a piranha tattoo on the leg 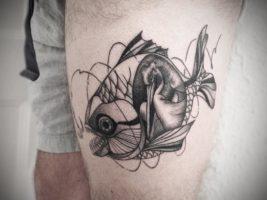 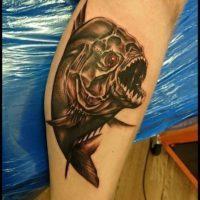 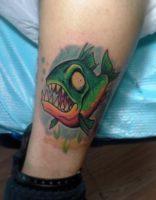 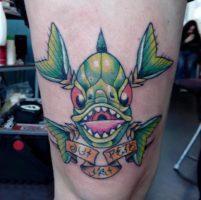 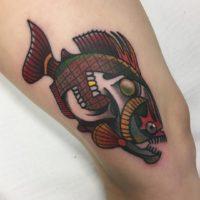 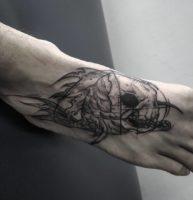 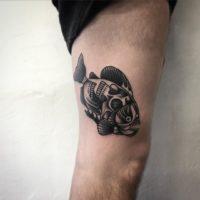