"Everything passes - this will pass too." Today we will talk about a symbol that carries a philosophical meaning. The hourglass tattoo is applied as a message to oneself and the world that time is fleeting and should not be wasted.

The choice to make just such a tattoo is taken very seriously, although the drawing does not carry any hidden symbols and subtext. Unless among prisoners in prison, the meaning of an hourglass tattoo is interpreted as counting the days until release. In this case, the date is written next to it.

Otherwise, such a picture suggests that its owner values ​​time and understands that life can be fleeting. In other cultures, an hourglass means moderation: the bearer of such an image is a calm, balanced person.

If the clock is depicted standing straight, then this is a sign of the continuous flow of life. In the case when they are tilted or lying on their side, read this as a desire to stop the moment.

In painting, hourglasses are often found with a similar meaning. Some plots of paintings can even be taken as a basis for a drawing for you. Let's say a painting by Khachatryan Meruzhan, filled with the Watercolor technique, will become a decoration for a girl. And the idea of ​​the painting by Pyotr Belov will suit the male half. It depicts skulls instead of sand in the clock, which tells us about imminent death.

Fans of abstract thinking will love the idea of ​​Lisa Rae's painting Watermelon Eaten in Time. This is how the author combined the deep meaning of the phrase "nothing lasts forever" with the fragility of matter, which was represented by our beloved Watermelon.

More on the topic:  The meaning of the bull terrier tattoo

What does an hourglass tattoo mean for men?

Such a symbol may indicate disappointment in the transience of life. Or that a person does not want to waste his life and values ​​time. Often a phrase is stuffed under the clock that characterizes the entire composition. Even more often they draw a tattoo of an hourglass with a skull or in the hands of Death. Time is killing, the picture says. Perhaps a person leaves us a message that death will overtake everyone, and we need to rejoice and live in full force while the sand is still pouring in your watch.

Another reason for drawing such an image is the loss of a loved one. Then the name and the date associated with it are written under the clock. This is a sign of grief and a promise to remember the one who passed away for life.

Do you think these were the saddest interpretations? But no. What do you think the hourglass tattoo means if it is depicted broken? This is an extreme degree of sadness and frustration. If whole hours still carry in themselves the hope that people will value time and loved ones, then the broken ones show that there is no longer any hope for this. Nothing to return. Such a symbol may indicate disappointment in the transience of life. Or that a person does not want to waste his life and values ​​time. Often a phrase is stuffed under the clock that characterizes the entire composition.

For mystical natures, an hourglass tattoo can mean the cyclical nature of life on the earth of the third dimension. About the wheel of rebirth and incarnation, because in the middle of the hours, life and death meet. Also, the owner of such a tattoo may wish to find harmony or already lives in harmony with nature and the laws of being.

What does an hourglass tattoo mean for women?

Unlike other images, the designation of an hourglass tattoo speaks of lost time, regardless of what is depicted next to them. This is one of the symbols that is difficult to misunderstand.

Such tattoos on the female body are interpreted as in men, but the reasons for the application are often rooted in sentimentality and fear of old age. For women, this tattoo means time that does not spare their beauty, as well as a warning not to waste life on those to whom we are indifferent. Appreciate youth! Don't waste it on sadness and struggle. Enjoy your life!

The image of an hourglass tattoo with a heart is interpreted as lost love. Another reason to fill such a picture is a memorable date. Loss of innocence, let's say. Sometimes it happens. In any case, a tattoo on the body is a way of casual acquaintance. It's easier to talk to a girl on an abstract topic and the question of what the hourglass tattoo on her body means will be very helpful.

Where to get a tattoo and in what style?

The oblong shape of the pattern means that the hourglass tattoo on the arm looks better. There are compositions that are performed on the chest or back. Then the designation of the hourglass tattoo takes on an even more personal character and tells us that either the disappointment in linear time is too deep, or the person strives for harmony. Women will love this baroque or newschool tattoo. In the photo of the hourglass tattoo you see in the Baroque style. Men - in style realism и old school.

This is one of the few symbols that looks great in monochrome. The fewer colors the better. In terms of time, such a tattoo is performed from three hours to two sessions of 5 hours each. Depends on the complexity, you know.

Photo of hourglass tattoo on body

Photo of hourglass tattoo on hand 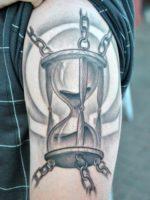 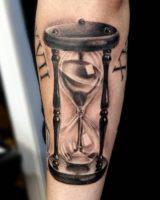 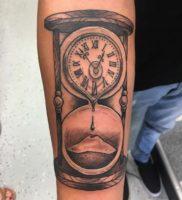 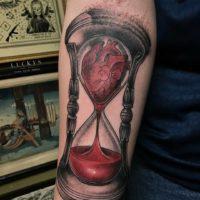 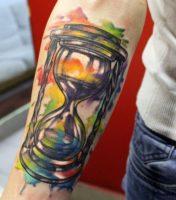 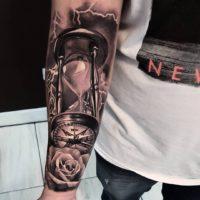 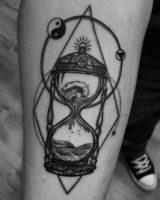 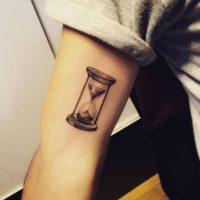 Photo of hourglass tattoo on leg 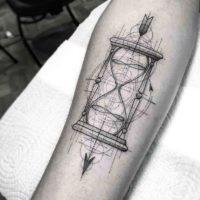 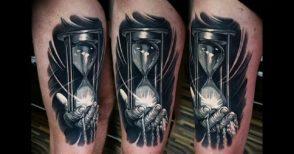 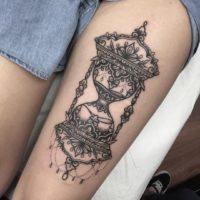 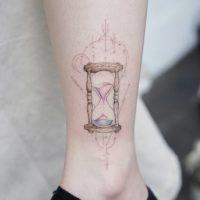 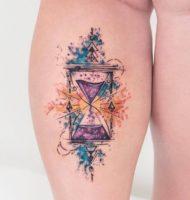 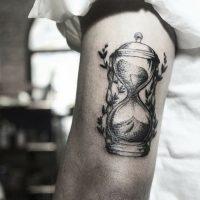 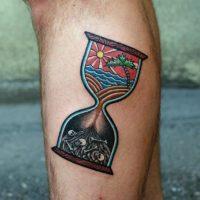 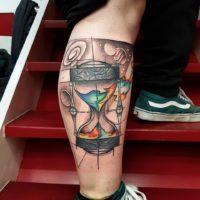