The person has been using the image of the triangle shape itself since time immemorial, but he has no definite meaning. This figure was one of the first to be depicted by a person, so its roots go far back in history.

For Christians, the triangle symbolizes the Trinity, for the Egyptians - wisdom, for the Freemasons - the cosmic principle. For the Jews, the meaning was somewhat different. Such a drawing simultaneously combined correct, rational thinking, execution and verbal content.

Who chooses an inverted triangle tattoo

A tattoo depicting a triangle is chosen, as a rule, by balanced people with a sharp mind and good intuition. They always know their goal, clearly and clearly formulate their thoughts. In any company, be it a friendly or a work collective, such people feel like a leader, the main one, “keep control of the situation”. However, it is very difficult for them to put up with someone's superiority.

The triangle is a visual expression of the ability to concentrate, focus and fully immerse yourself in business. He talks about such traits of a person's character as strength, inflexibility, constant movement forward.

There are a huge number of options for performing an inverted triangle tattoo. Usually, this symbol does not take up much space on the body. An inconspicuous contour triangle is perfect for females. on the inside of the hand, circle within a triangle.

And for those who are not afraid of large body designs, a small ornament inscribed in a triangular figure on the back between the shoulder blades will suit, which will look very mysterious.

Guys prefer images of the usual inverted triangle, three triangles connected together, an all-seeing eye in a triangle, a tree in a triangle and place it on the hands or forearms.

More on the topic:  Photos tattoo inscriptions on the edge of the palm

Photo of an inverted triangle tattoo on the arm 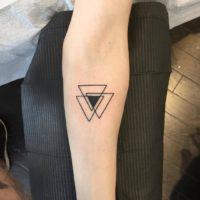 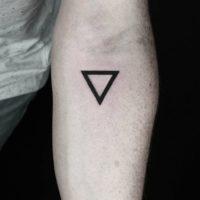 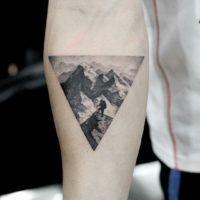 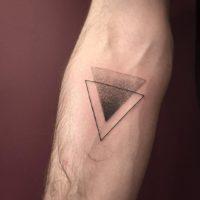 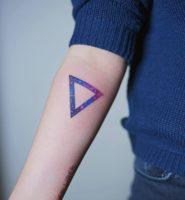 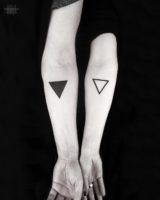 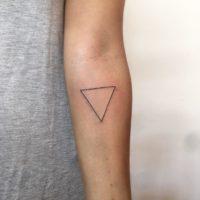 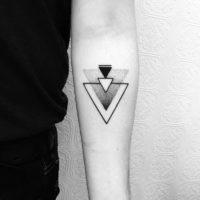