Initially, the palm tree was immortalized on their bodies by sailors as a memory that they had visited many exotic countries. Now tattoos with this plant are made by those who prefers rest in hot countries.

The palm is quite an interesting tree. The image has no semantic meaning and is rather applied for reasons of beauty than for other reasons. Searching for a single meaning is useless, since different peoples have different attitudes towards this tree.

The palm tree is more suitable for women, since its trunk is often associated with a graceful girlish figure, and dates - with a woman's breast as a symbol of fertility. For a long time, Catholics used an exotic tree for burial as a sign that they were not afraid of death.

The specificity of using a palm tree in tattoos is that the tree is not depicted standing alone... The tattoo is applied on the forearm, back, in the area of ​​the shoulder blades, on the thigh, on the leg. Palm trees look good both in color and monochrome. The dimensions are determined by the placement.

A palm tree tattoo does not carry negative energy, therefore, wishing to perpetuate relaxation and passion for warm countries, you can safely apply such an image.

Photo of palm tattoo on head 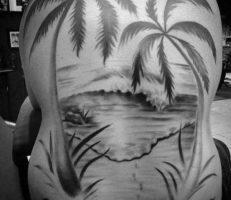 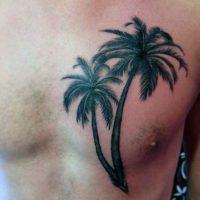 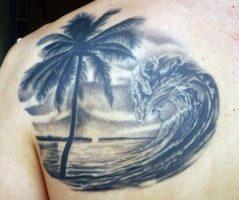 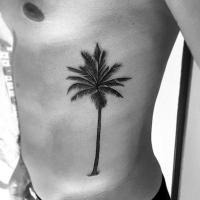 Photo of palm tattoo on hand

Photo of palm tattoo on leg