Rhinoceros tattoo symbolizes strength, irrepressible temper and power. This is one of the largest mammals that live on land, a very controversial creature. Its behavior is difficult to predict.

In a matter of seconds, the animal from a calm and clumsy creature can turn into a formidable enemy that strikes very quickly.

The meaning of a rhinoceros tattoo

For a long time, the horn was considered a very powerful amulet that brings good luck. He was also endowed with magical properties. Thick skin and dangerous horn make the animal invulnerable to ill-wishers. It is these features that contributed to the popularization of the rhino tattoo.

Many African tribes used the animal as a totem, believing that it would protect the tribe from enemies. Tattoos were applied to the body of warriors. It was believed that the rhino would bring strength to the owner and save him from misfortune.

The meaning of a rhinoceros tattoo lies in the specific characteristics of the animal. It is believed that such an image will give the owner confidence, constancy, strength. In China, rhino is believed to bring good luck, which is why many firms use it for their emblems.

Places of application of the rhinoceros tattoo

The rhinoceros tattoo is masculine. For women, such an image would be very rude and inappropriate. Place the tattoo on different parts of the body. Since the drawing is difficult to refer to as small, the tattoo looks most advantageous on the chest, shoulder, and back. I always depict the rhinoceros in gray, with clearly traced details. Most often, the head of an animal is depicted with a protruding horn. Much less often you can find the whole image of the animal. The background can be anything.

The presence of such a tattoo indicates constancy, stability, self-confidence, the ability to overcome any obstacles. Such a tattoo definitely brings success to its owner and protects from ill-wishers.

More on the topic:  Light tattoos

Photo of a rhinoceros tattoo on the body

Photo of a rhinoceros tattoo on the arm 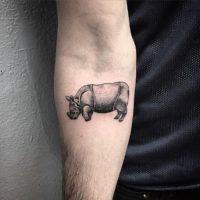 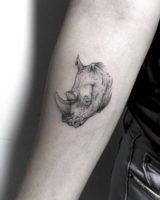 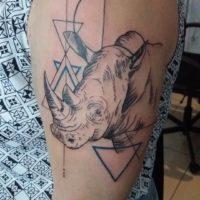 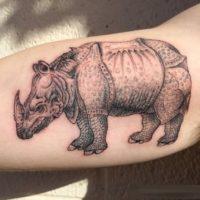 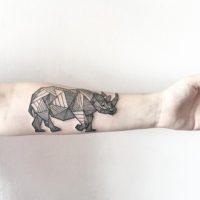 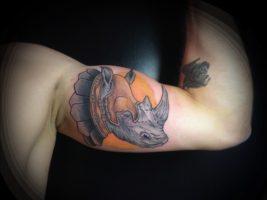 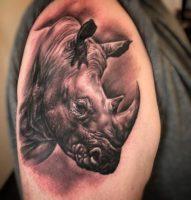