Ancient people much stronger than modern people believed in otherworldly forces, spells, incantations and much more. With the development of progress, mankind has not lost faith in other worlds, people with psychic abilities, although science has reduced the number of believers.

All symbols designed to protect against evil go deep into antiquity. In those days, amulets, talismans were made, signs were put on them, on clothes and on the skin. Tattoos still have a protective effect. One of the strongest protective signs was the hammer of Thor, used since the time of the Vikings.

The meaning of Thor's hammer tattoo

The symbolism of the hammer tattoo has undergone significant changes. It was originally used in the worship of the sun deity. Further, they began to perceive him as a mystical sign unattached to anything. In both cases, the hammer of Thor carried order, anti-chaos, restoration of good.

The hammer tattoo was done by people to show their fearlessness and ability to resist any attacks. The image got rid of any disease, filled with energy to resist enemies, helped to make fair decisions.

Now the hammer of Thor tattoo is placed on their bodies by those who want to display their uniqueness and strengths of character:

After the release of the Marvel films, many fans of the God Thor appeared, who placed his hammer on the body.

Placements of the hammer of Thor tattoo

Photos of Thor's hammer tattoo reflect the originality and beauty of the image. It carries with it mystery and uniqueness. A person with such an illustration on his body is most likely an extraordinary person. The image can help in business and politics. Thor's hammer looks courageous and is more suitable for the strong half of the population.

More on the topic:  The meaning of the OM tattoo

Most often, the image is preferred to be placed on the arms, back or chest. The symbol fits perfectly into compositions united by themes of mysticism and antiquity.

Photo of Thor's hammer tattoo on the body 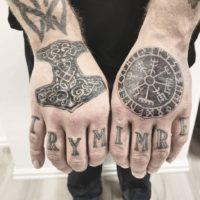 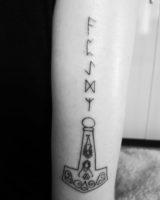 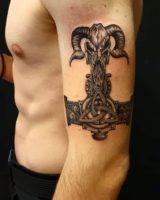 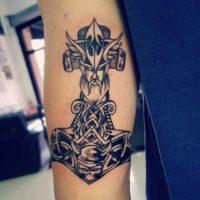 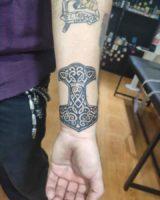 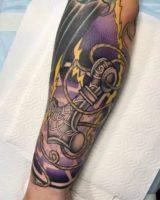 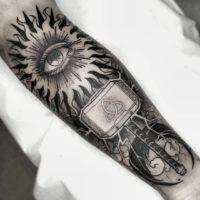 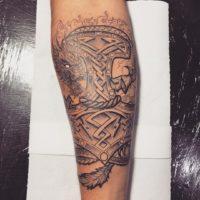