The swan is a symbol of purity, fidelity, love, the ability to transform. Swan tattoos are very popular among men and women.

The versatility of a tattoo results in a variety of variations in images. It could be a lone bird or a couple.

The most common meaning of a swan tattoo is loyalty, mutual love... The tattoo is notable for its eccentricity and testifies to the fact that the most important thing for a person is feelings and family values.

The abundance of photos of a swan tattoo allows you to choose an option that suits an individual person. The tattoo can be done so in color and black and white.

The image of a bird can be supplemented with various elements, water, flowers, or simply a blurred background. Individual parts of the bird can be used. Real masters are able to draw all the feathers on the wing.

The meaning of a swan tattoo is loyalty, devotion, beauty of the inner world, grace, love. Many people get a bird tattoo after the wedding to show that this union is lasting, based on mutual love, devotion to each other.

Many spouses get tattoos depicting white swans after the wedding. This not only symbolizes their feelings and devotion, but is a kind of vow to love each other forever.

Some apply this in memory of the death of a loved one, showing that they will be faithful to one.

The meaning of a swan tattoo among different peoples

More on the topic:  The meaning of the monkey tattoo

In addition to the white one, there is also a black swan tattoo, which symbolizes the gift of foresight and the presence of magical abilities. A person with such an image, as a rule, is endowed with magical powers.

It should be noted that the bird is reflected in prison tattoo... A swan with a crown on her head indicates that the prisoner was free before she was convicted.

Not many people know that according to some cultural traditions, the swan is a symbol of death. It is believed that before dying, he sings a beautiful song.

Photo of swan tattoo on body

Photo of swan tattoo on hand 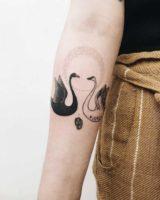 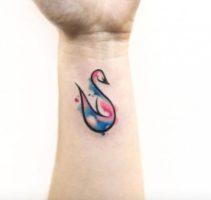 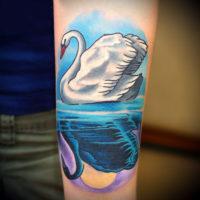 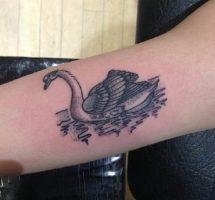 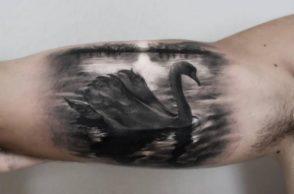 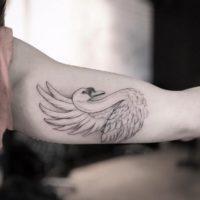 Photo of swan tattoo on leg 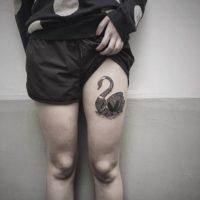 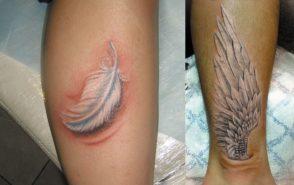 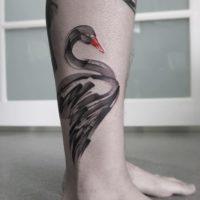 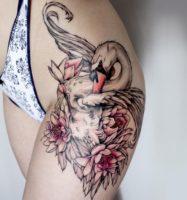 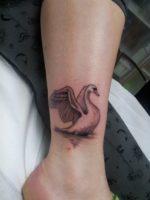