A rat tattoo most often carries a philosophical meaning that does not completely coincide with public opinion regarding the meaning of the symbol of this rodent.

The drawing of a rat characterizes its owner with such qualities as agility, agility and speed. These character traits help a person, like a rat, to be able to "spin" in order to survive in their environment.

The meaning of the rat tattoo

The rat tattoo is given opposite meanings. On the one hand, they symbolize death, destruction, loss, and on the other hand: wisdom, ability to adapt to any circumstance, foresight. The Chinese revered the rodent, considering it a symbol of prosperity, wealth and success. In the culture of Islamic states, this animal is the embodiment of sensuality.

This tattoo is also suitable for entrepreneurs who, like this animal, have ingenuity and flexibility, are able to perfectly adapt to the environment for conducting their activities. In addition, the rat is the smartest representative of rodents. The rat, like the entrepreneur, has a flair. The proof of this is the well-known ability of rats to predict the death of ships.

Rat tattoos are also recommended for people who believe in the existence of otherworldly forces. In African beliefs, it is these animals that are considered by the local priests as guides between different worlds. In Christianity, this rodent is associated with the devil.

Depending on the tattooing technology, the rat has different meanings. If the drawing of an animal is made in a natural, natural form, then it symbolizes the properties of this rodent, if in a cartoon, then, accordingly, endows a person with the properties of a hero from a cartoon. A striking example is Ratatouille from the cartoon of the same name or Ninja Turtle Sensei.

In some people, a rat tattoo can only cause negative emotions that are associated with the rodent's habitat and harm to animal human property or health. Nevertheless, the ancient Eastern culture chose the rat as a symbol of such human qualities as cunning and intelligence.

More on the topic:  Yakuza tattoo

So a rat tattoo in this sense is suitable for people who are smart, educated and cunning. Chinese culture put a symbol of wealth, prosperity and prosperity in the image of a rodent. No wonder he is the first sign of the Chinese zodiac. Among the peoples of Islam, the rat is the embodiment of sensuality.

The negative connotation of the rat tattoo has been noted in several cultures. In Japanese culture, the drawing of this animal can be symbols of nezumi - werewolf rats, which in human form are people of small stature.

They are characterized by a complete lack of moral principles, however, they have highly developed natural qualities of a rat - scent and sight. Most often "nezumi" were used as spies and assassins.

They always acted under cover of night, possessed a very high speed of movement in the dark and great strength. Therefore, they were associated with rats. It also contributed to the appropriation of an aggressive rat tattoo.

However, the rat is also one of the seven symbols of good luck in the Land of the Rising Sun, therefore it can be used as a noble tattoo. So, in japanese culture tattoo this animal can be depicted with bales filled with rice, thereby symbolizing fertility, the high position of a person in society. The image of a large rat with a bunch of pups in the picture is applied in Japan by fathers with many children.

It should also be noted that the tattoo belongs to the category of universal - suitable for men and women. Most often, the pattern is placed on the chest, shoulder blade or forearm. The tattoo can be performed both solo and as part of a composition.

The rat tattoo also has its meaning in places of imprisonment. It is forcibly inflicted on a prisoner who has been convicted of "ratism" - stealing from his own people. The symbol of "triviality" is applied to the back of the prisoner.

Photo of rat tattoo on body

More on the topic:  Photo of tattoo inscription on the arm with the name Nastya

Photo of rat tattoo on hand 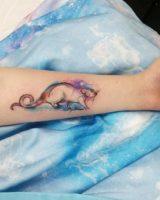