There are many images in tattoo culture with ambiguous symbolism and a confusing history. This article will tell you about one of the most mysterious and controversial of them. We will try to find out the history of the origin and the meaning of playing card tattoos, as well as find out the attitude towards this symbol in modern society.

The history of this “toolbox” for gambling is as confusing and mysterious as the meaning of the tattoo of playing cards. There are several completely different versions of the origin of the cards, and which one is actually true is still unknown.

The wisdom of the world on tablets

One version says that the first cards appeared in ancient Egypt. It is believed that the priests, having learned the secrets of the universe, put them in a symbolic form on 78 gold tablets, using them not for fun, but for occult rituals. It was they who became the first Tarot cards in history. Later 56 images, called “Minor Arcana”, formed the deck of playing cards, and 22 tablets, “Major Arcana”, remained only as a constituent of the Tarot deck. According to this hypothesis, the cards came to Europe along with many goods of Arab or Gypsy merchants.

The next version of the history of the emergence of a deck of cards tells that this kind of fun came to us from China, where the court nobles, wishing to diversify their leisure, found it interesting to draw allegorical images of plants, birds and animals on tablets, and then use them in an impromptu game. Instead of paper cards, they used small wooden planks, ivory tablets or even mussel shells decorated with landscapes, flowers and images of people. Such pictures were used not only for entertainment, but also for teaching. In addition, they differed in color, and each color had its own separate symbolism:

More on the topic:  Photos female tattoos lettering on the foot

Joy for the king

As for the third version, according to it, the court jester and painter Zhikomin Gringoner invented and drew the playing deck for the consolation and entertainment of the insane king of France Charles VI, who went down in history with the nickname Karl the Mad. Playing cards was believed to help him calm down during relapses. True, the set of pictures created by the artist had only 32 images, because there was no room for the ladies in it. And already during the reign of the next monarch, Charles VII, the cards were improved, and then the now known "French deck" was formed.

The value of playing paraphernalia in a tattoo

“Whatever Voltaire interprets - or Descartes,

The world is a deck of cards to me

Life is a bank: rock the mosque, I play

And I apply the rules of the game to people. "

Tattoos with cards have recently become quite popular, they can be seen in both men and girls. During the Renaissance, this integral attribute of gambling became the personification of the main human vices, even the backs of the cards themselves were depicted with images of sins in various variations. And what is the significance of playing cards tattoo in our time?

More on the topic:  Cross tattoo with inscription

But still, it is worth saying that the meaning of the pattern of the cards on your skin is up to you. It doesn't matter at all what meaning this image acquired in the course of history, because the main thing is that you get aesthetic pleasure looking at your tattoo, so that it brings joy to you.

Old school is a classic for sketching with maps. In this style, both single cards and their combinations in combination with dice are filled, pistols, roses, ribbons, tongues of flame and appropriate inscriptions.

New school, which does not have any rigid rules and restrictions in the technique of execution, will be no less suitable direction for such a tattoo. In this style, you can develop the plot of your drawing as much as your imagination suffices, and bright saturated colors and a wide black outline will make the work voluminous, catchy and even defiant. Cards in a composition with girls and jesters, skulls and blades, with playing chips, a horseshoe, stars or a four-leaf clover - all this can be played in a colorful and original way in New School.

By the way, realistic plots with playing cards look very impressive. They are often made in black and white or just dark colors to create a special atmosphere and convey the energy of the picture. You can find stunning illustrations of old or burning cards, depict them along with the symbol of death or theatrical masks in a variety of interpretations. Also worth remembering are the tattoos depicting the Joker - the DC Comics character who holds the card in his hand - his hallmark, and smiles with his insane and fearful smile.

Photo of a tattoo with dice and cards on the head

Photo of a tattoo with dice and cards on the body 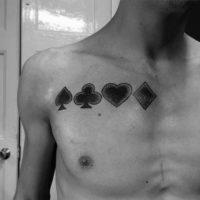 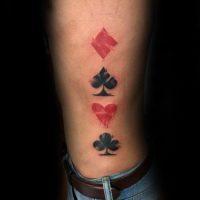 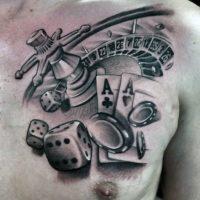 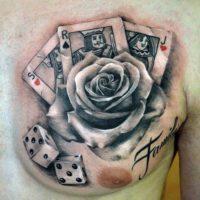 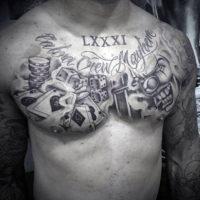 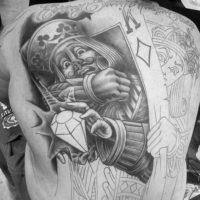 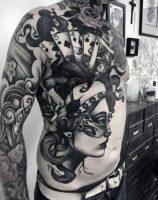 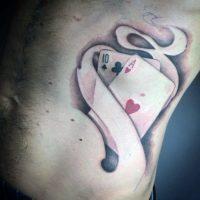 More on the topic:  The meaning of a beaver tattoo

Photo of a tattoo with dice and cards on the arm 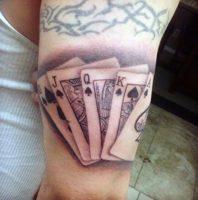 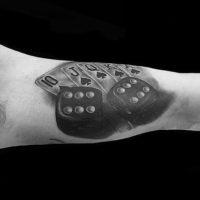 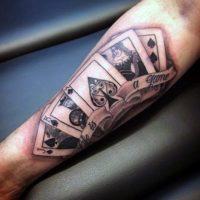 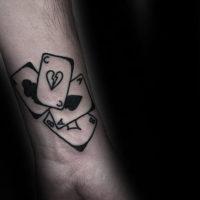 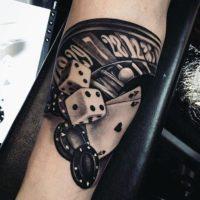 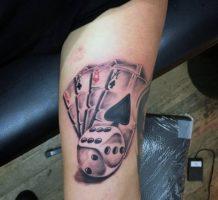 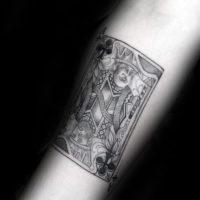 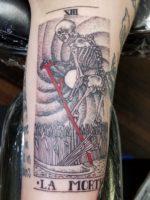 Photo of a tattoo with dice and cards on the leg 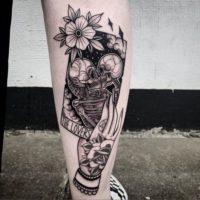 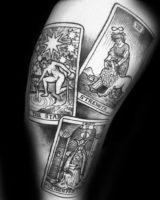 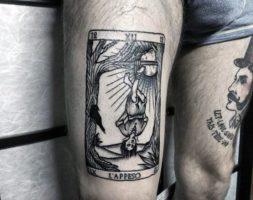 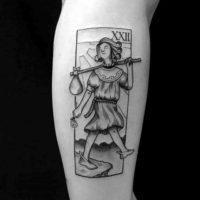 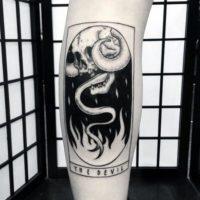 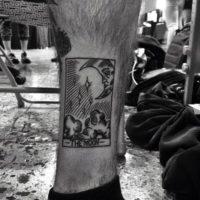 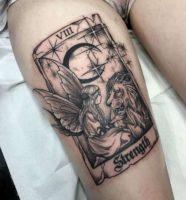