Surely you have seen more than once the image of a funny little man with incomprehensible processes on his head, who plays the flute. In fact, this is an image of an ancient god, whom the Indians considered the patron saint of newlyweds, as well as a symbol of a rich harvest and abundance, a god of sexual energy and the emergence of new life.

They prayed to this god not only to ask for fertility or childbirth... Secret dreams and hopes were entrusted to him without fear. According to Indian legends, Kokopelli often came to people, while taking on a human form. It was not difficult to find out about his arrival: he brought with him a change in the weather, changed winter in spring, and summer in autumn. God never parted with his flute - that is why he is also considered the patron saint of fun, giving joy and positive.

Kokopelli tattoo will give to its owner fun and mischief... Such a tattoo is perfect for a person who is not alien to creativity: it is believed that he is very fond of artists and musicians, dancers, poets, writers and just people who are fond of inventions. The meaning of the tattoo depicting Kokopelli is extremely positive.

Today you can see various versions of the image of this god, but his flute and hair sticking out in different directions remain unchanged. Next to him are usually depicted:

This eternal traveler really brings a smile even with his appearance. He is also credited with good mischief, the desire to violate various laws and attitudes imposed by society, while not causing harm to anyone.

If you feel that sometimes you lack the thirst for life and optimism, then a tattoo with the image of this cheerful god is what you need. It is also loved by those who cannot imagine life in one place and are constantly in search of new cities and countries, discovering the world.

More on the topic:  Photos of tattoos "Thank you parents for your life" in Latin

Where to apply the tattoo?

In fact, Kokopelli is perhaps one of the few images that look great on any part of the body. You only need to decide on the size of the future tattoo. A large picture is best stuffed on the back or bicep: this option is most likely preferred by men. Women can place a little Kokopelli on the shoulder blade, wrist or ankle.

Photo of kokopelli tattoo on the body

Photo of kokopelli tattoo on hand 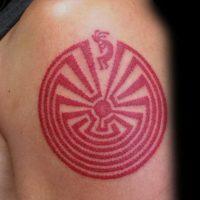 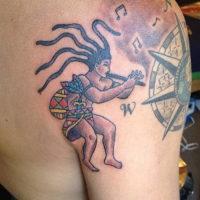 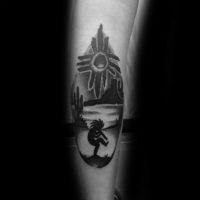 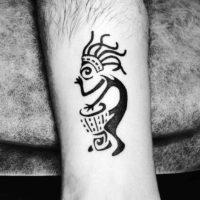 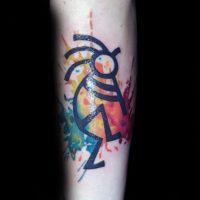 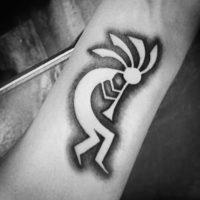 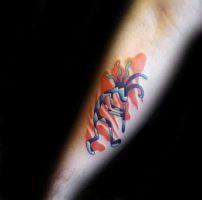 Photo of kokopelli tattoo on the leg 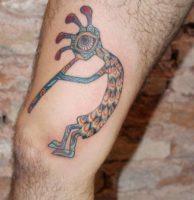 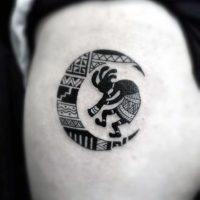 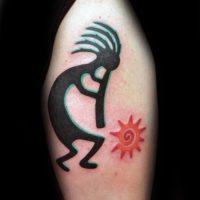 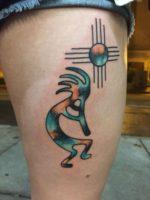 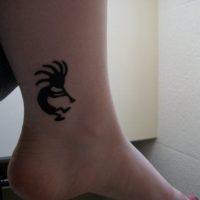 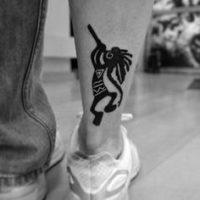