Brass knuckles belongs to the category of edged weapons. It looks like a plate made of durable metal, equipped with special holes so that you can pass your fingers through them and hold the weapon in your hand.

The history of brass knuckles tattooing begins with a heavy share of sailors. It was people who went on long voyages for one purpose or another who first began to decorate their bodies with just such a pattern. The inability to foresee the behavior of the seas, which conceal great danger, became the basis for the development of the culture of wearable drawings.

For sailors, brass knuckles always belong to the category of "honest" weapons, which was due to the fact that it was impossible for them to hit a person covertly, as, for example, it can be done with a dagger.

However, since fair fighting has lost its popularity, this melee weapon has come to be perceived as a scoundrel's weapon. It could be unexpectedly pulled out of the sleeve to deliver the final blow to an unarmed opponent. Because of this, it is believed that if a brass knuckle is drawn on a person's hand, then he has a restless or even furious character. Such a person is perceived as ready to rush into battle at any second, without wasting even a minute trying to understand the situation.

Sometimes, this kind of tattoo is done by those people who feel their own weakness. Looking at this kind of underwear gives them a sense of a surge of strength and self-confidence, as if this image of a weapon would help them avoid a surprise attack.

The meaning of a brass knuckle tattoo

Despite the fact that now an artistic tattoo is ubiquitous, the opinion has not yet become outdated that the image of brass knuckles on the body is worn by the person who has a connection with the underworld or simply conducts business on a fine line with the legal.

More on the topic:  Squirrel tattoo

Due to its origin and appearance, this tattoo is most often done on the back of the hand or forearm. In combination with other details, it can be placed on the shoulder or even on the chest. Quite popular is the option when a tattoo is stuffed in the form of a knife with a handle similar to brass knuckles. In this case, the knowledge of the tattoo changes somewhat, as the symbolism of dexterity, power, duality and stamina is supplemented.

In addition, brass knuckles are often stuffed and combined with the skull, or so that each ring of the weapon seems to be crowned with small shards. In such a situation, the symbolism of immortality, luck, wisdom, or even loyalty to one's goal or ideology is added to the typical meaning, if there is a drawing on the shoulder.

Mainly use old school style, which is primordial for this drawing. Currently, no less popular is the performance of knuckle dusters in styles such as blackwork, dotwork, new school, realism, modern and minimalism.

Best of all, a brass knuckles tattoo on the back of the wrist for men, made in the style of old cheekbones or new cheekbones on the shoulder, always looks.

But, of course, one cannot judge the character of a person because of the drawing. After all, many succumb to the trend of fashion or listen to the usual advice of the master. In addition, the perception of the drawing is different for each person. Someone will make a brass knuckles tattoo with certain thoughts and goals, and someone will only be guided by the fact that they saw this drawing from a famous person or idol.

Photo of a tattoo of a caste on his hands

Photo of brass knuckles tattoo on the body 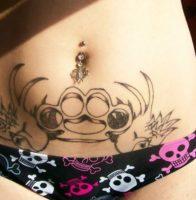 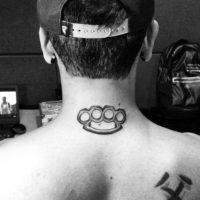 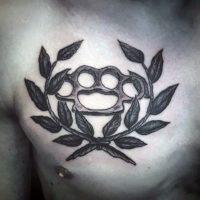 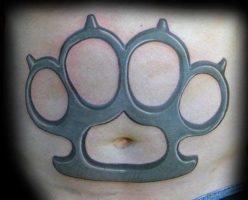 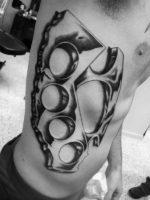 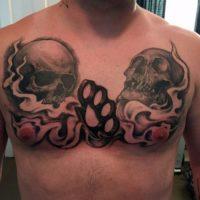 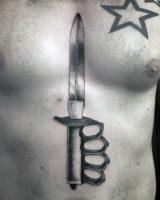 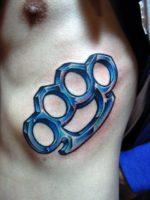