Boar tattoos tend to be done by representatives of the stronger sex. In the wild, a boar is a leader characterized by ferocity, fearlessness, fury, and belligerence.

The meaning of the boar tattoo

Drawing only the head of a boar symbolizes a talisman that not only protects against various life dangers, but also gives the owner of the tattoo strength, health, and feeds his masculinity.

The boar tattoo has various meanings among European peoples. Symbolizing war, for the Celts and the inhabitants of the Scandinavian countries, the boar acted as the guardian and protector of their peoples, for the Romans and Greeks - a symbol of military raids and destruction.

Far Eastern peoples, including the Japanese, put such character traits as courage and valor into the image of a wild boar. Also for the inhabitants of the Land of the Rising Sun, this animal symbolizes perseverance, perseverance in achieving their goals, fearlessness and military courage.

The boar tattoo also has a noble meaning. For many nations, it is a symbol of wealth. The Chinese consider the wealth of forests to be the merit of the boar; among the Scandinavians, the boar, in addition to war, symbolizes fertility and productivity. In the beliefs of the inhabitants of India, the boar is a deity who was the first for mankind to plow the land for people to farm.

The color scale of the image of the boar also has a different meaning. The white color of the animal is associated with the element of water and the moon, gold - with the image of the sun, where each bristle is a ray of light.

In some cultures, the boar tattoo is associated only with evil. Christianity in this wild animal sees the embodiment of anger, cruelty, lust.

More on the topic:  Tattoos that bring good luck and money

The American interpretation of the boar symbol is also prone to the use of this tattoo by men. In the culture of the inhabitants of North America, the boar tattoo characterizes the leadership qualities and determination of its owner. Also, this drawing on a man's body can speak of his sexual stamina and loyalty to his wife.

Most often, a wild boar pattern is applied to the shoulder or the inner side of the forearm... The reason for this is medieval hunters, whose drawing of a boar on their shoulder spoke of their confidence in their effective hunting, that they would not return without prey. Also, a drawing of a boar was applied to protect against a real angry boar during a hunt.

Before drawing a drawing, it is important to choose the right sketches of a boar tattoo, so that instead of a frightening wild animal, you do not draw a pleasant domestic pig. According to the technology of execution, this tattoo is one of the most difficult, so you should contact a professional tattooing, who will do everything at the highest level.

The most popular is the image of a boar's head, with a frightening grin and fangs, although the complete image of the animal is also quite popular. In addition to the drawing of the animal, hieroglyphs, drawings of vegetation can be applied.

It should be noted that applying a boar tattoo will not give its owner strength, belligerence or ferocity. This drawing only emphasizes the presence of these qualities in a man.

Women are not recommended to apply a boar tattoo to themselves due to its double interpretation due to the prison meaning of this drawing. In the zone, lesbian criminals who are imprisoned for long periods of time adorn their bodies with a boar tattoo. With this tattoo, they show their "masculine role" in a relationship with another woman.

Photo of boar tattoo on head

More on the topic:  Tree tattoo

Photo of boar tattoo on body 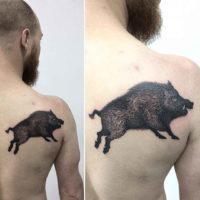 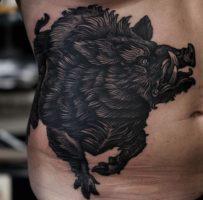 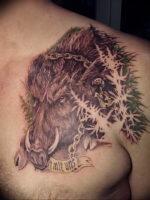 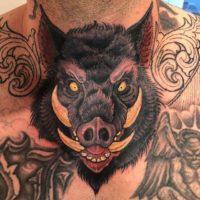 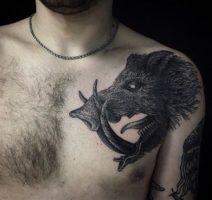 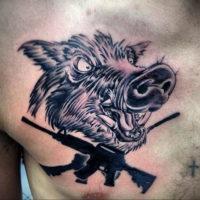 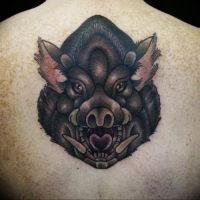 Photo of a boar tattoo on the arm 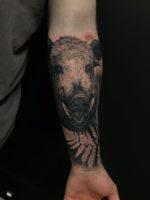 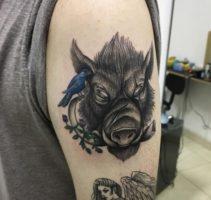 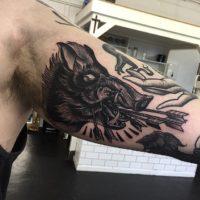 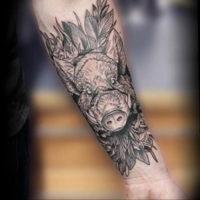 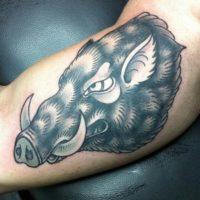 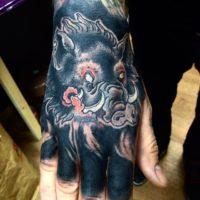 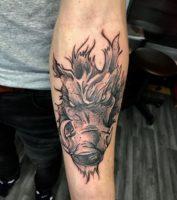 Photo of a boar tattoo on the leg 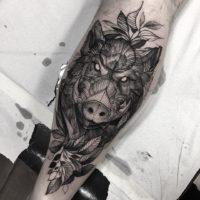 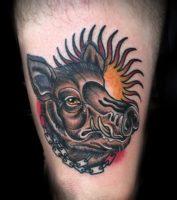 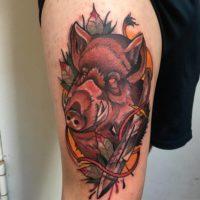 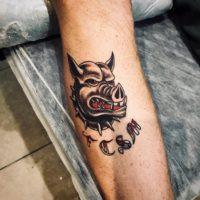 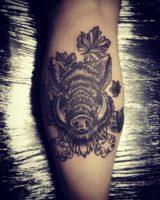 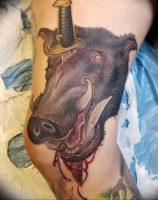 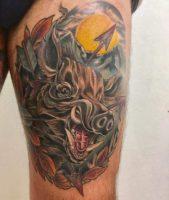