A burning torch tattoo is often used by people in prison. Sometimes she plays the role of a talisman or just a hooligan tattoo. What is typical - everyone lays in it their own sacred meaning, depending on life experience and perception of the world.

The meaning of the torch tattoo

Typically, a flaming torch tattoo signifies a person's relentless pursuit of freedom and speaks of partnership in places of imprisonment. It also testifies to the stay of its owner in a colony for persons who have committed unlawful acts through negligence.

The torch tattoo is applied in memory of a long stay in a maximum security penal colony, and the number of knots depicted on the wire indicates the number of years spent behind bars.

In addition to the criminal connotation, the torch depicted symbolizes the sacred fire that burns forever. Also acts as symbol of freedom and independence from outside opinion. The generally accepted meanings of a torch tattoo: life and death, love and family ties, war and power, God and the Word of God, soul and spiritual peace, knowledge and mind, fertility and harvest. Fire - one of the four natural elements. It can be beneficial and harmful at the same time, be creative or destructive.

A person who has decorated his body with a tattoo depicting a burning torch strives for freedom and independence, camaraderie, knowledge, has hope and faith. It can also talk about a person's desire to be cleansed from past sins, burn them in a blazing flame. Such people have great fortitude, are distinguished by exceptional firmness in their choice. They are always extremely alert and careful. In dealing with them, you always need to be careful and accurate in your statements.

More on the topic:  Male and female rib tattoos

Most often, a torch tattoo is applied to the shoulder or forearm, hand, less often on the thigh.

Photo of torch tattoo on hand

Photo of torch tattoo on leg 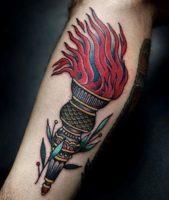 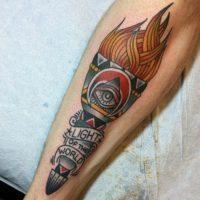 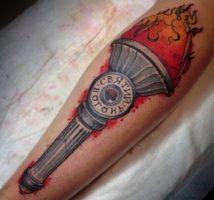 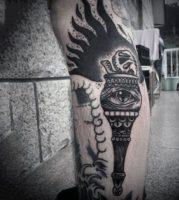 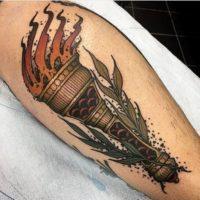 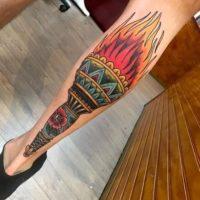 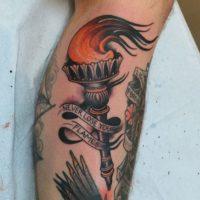 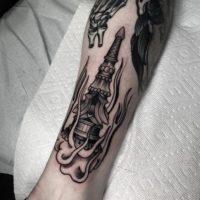