It has long been known that the drawing of a tree does not carry negative energy, rather, on the contrary, it carries a positive charge, symbolizes constant work on spiritual growth, the development of the inner world and improvement in various areas of life.

It is customary to divide trees into "male" and "female". For example, an oak tattoo is considered the right choice for strong-minded, powerful body, self-confident men.

And indeed, Christians from time immemorial have an oak symbolized power, courage, ability to recover, unprecedented strength and endurance. It is quite understandable that most of these qualities are possessed by real men, therefore it is quite justified to consider an oak tattoo as a “male” pattern.

And the presence of a huge number of fruits and acorns in the tree symbolically emphasizes the fertility of men, their desire to continue their kind. After all, it was not for nothing that in ancient times the seeds and acorns of oak were considered to be talismans and amulets.

That is why our great-grandfathers, with their help, made a kind of amulets, which they hung at the entrance to the dwelling, thus protecting it from the penetration of bad people and evil spirits.

What the oak symbolizes among different peoples of the world

In ancient Greece, acorns were the constant companions of the image of Artemis (the goddess of the hunt). It was believed that the more acorns the goddess has, the more successful the hunt for wild animals will be.

In ancient Rome, the oak was given the dominant place - after all, ancient chariots could turn the strong in the body and spirit of a man. Excavations of ancient pharaohs confirm the special attention to the depiction of oak on necklaces, signet rings and rings.

The rock carvings of ancient painting that have survived to this day indicate that the oak tattoo adorned the bodies of the soldiers of Sparta. Although such drawings were temporary and were applied using natural plant dyes, but, nevertheless, they were a kind of prototypes of modern tattoos.

Today, the meaning of the oak tattoo, although it is based on ancient traditions, also acquires the features of the modern world. Such a picture today is chosen not only by men, but also by girls.

On a fragile female body, the drawing of a powerful tree looks special, but, nevertheless, its symbolism does not suffer from this. After all, the owner of such a tattoo promises good luck in all her endeavors, the creation of a reliable strong hospitable family with a large number of children.

Photo of oak tattoo on body 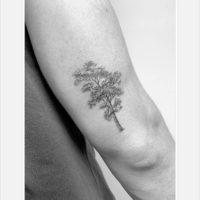 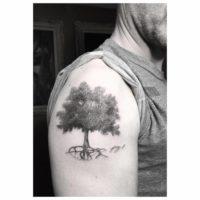 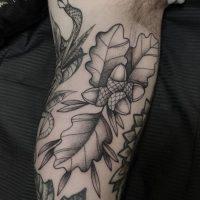 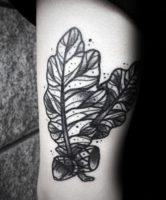 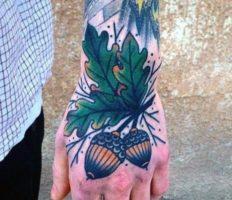 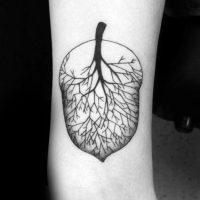 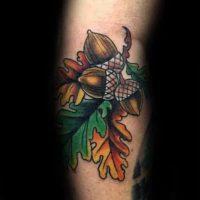 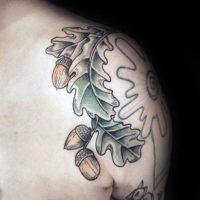 Photo of a daddy oak on his feet 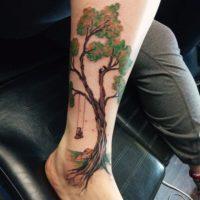 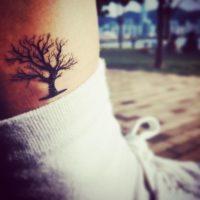 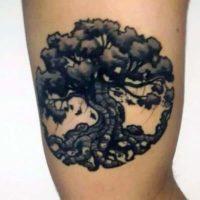 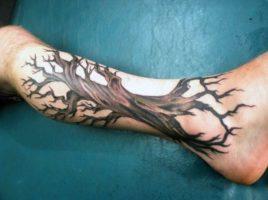 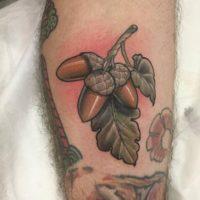 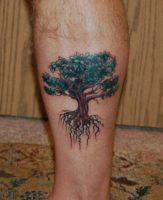