The famous politician Che Guevara is associated with the Cuban Revolution by most people, but not everyone knows that he also acted on the territory of the Democratic Republic of the Congo and in other countries (data are classified as classified). In order to highlight his origins, he used the nickname Che, which is a frequent reference in Argentina. Comandante's contemporaries described him as a strong leader, a strong-willed person who is able to fight for justice and be responsible for his actions.

The meaning of a tattoo with Che Guevara

For most, the portrait of Che Guevara has become a brand. His appearance is depicted on bags, caps, T-shirts, but for some this is not enough, and therefore the portrait of the Argentine leader is applied to the body. Probably, this fashion for a tattoo depicting the rebel-revolutionary Ernesto Che Guevara is due to the fact that his portrait was immortalized on his body by some modern stars, including boxer Mike Tyson.

Che Guevara's tattoo means the presence of a rebellious spirit, disagreement, demand for change in the owner. Often, today's youth choose such a tattoo to say that does not recognize any authority and will not obey anyone.

Basically, the portrait of the commandante is immortalized on the arms, back or chest. A portrait of an Argentine rebel can be pinned in the form of a contour or a volumetric color image, as well as with or without a cigar. If desired, Che Guevara's tattoo can be made more individual: the master can additionally pin any popular sayings of the famous revolutionary, for example, "It is better to die standing up than spend your whole life on your knees." In addition, you can choose the language in which the phrase will be pinned: Spanish or Russian. The renowned leader of the fight against world imperialism hardly imagined such posthumous glory.

More on the topic:  Photos tattoo lettering behind the ear

Photo of a tattoo with Che Guevara on the body

Photo of a tattoo with Che Guevara on the arm 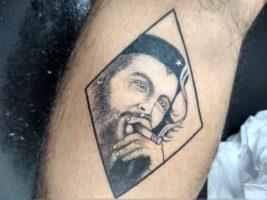 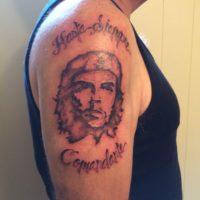 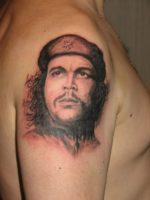 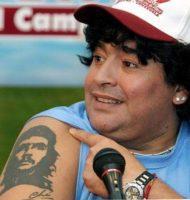 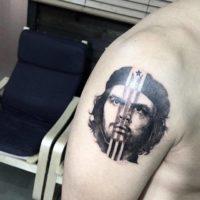