The seagull bird symbolizes independence and a sense of freedom. When you follow her graceful flight, the sea is always remembered. Seagull tattoos can often be seen on people who have devoted most of their lives to the sea. This bird makes sailors think about home, land and close people. This is due to the fact that it does not fly far from the coast.

The meaning of the seagull tattoo

This image is for loved ones and for fishermen... The seagull tattoo is a symbol of a successful fishing trip that ends with a big catch. After all, the bird itself is a very agile fish hunter.

For most prisoners, the time they spend in prison is wasted, which is symbolized by the tattooing of a seagull on the prisoner's body. By filling such a picture, a person sincerely regrets the wasted time. For them, the bird is also an image of the long-awaited freedom, which every prisoner looks forward to. This meaning of the tattoo is well revealed by the drawing of a seagull that flies over the waves. If the bird is depicted against the background of a shield, then this is a symbol of the strong friendship that the person experienced before he went to prison.

For people in the wild, the meaning of a seagull tattoo can be understood as:

Such people do not see obstacles and prohibitions in front of them, and can easily change the direction of their lives and cope with difficulties without problems. They are devoted to their opinion and try to achieve their goals as quickly as possible.

Other meanings of this image on the body include:

More on the topic:  Photos tattoo lettering on the bicep

The seagull can easily adapt and live next to people. Flocks often live near fishing huts and take advantage of all the benefits provided to them. Based on this, one of the many meanings of the image of this bird in the form of a tattoo can be excellent communication skillsas well as his ability to adapt to different life situations.

The seagull is a migratory bird, which allows a tattoo with its image to symbolize betrayal or infidelity in feelings. Among the behavioral features of gulls, one can single out their habit of dropping eggs of other birds from a great height. For this reason, some people may put a sense of revenge into their seagull designs. Basically, they make a tattoo of a seagull on the arm, sometimes they stuff it on the chest.

Photo of a seagull tattoo on the body

Photo of seagull tattoo on hand 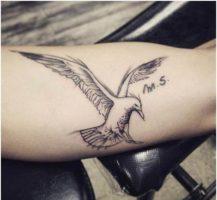 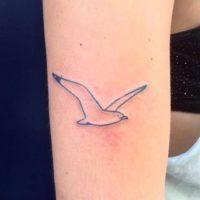 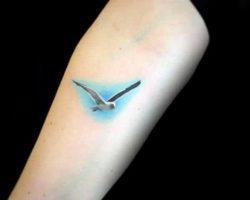 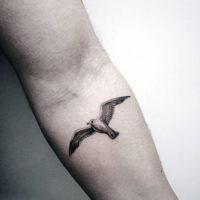 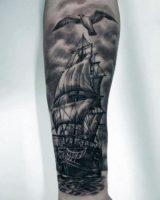 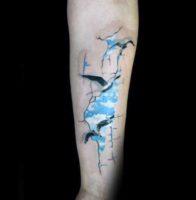 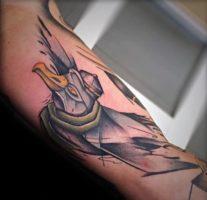