A huge number of legends and myths tell about unknown animals and mysterious creatures. In this way, supporters of tattoos of such content declare to the world their character and character traits, they identify themselves with the chosen mythological animal.

The meaning of the Cerberus tattoo

The myth of the three-headed Cerberus, the son of Echidna, has been known since ancient times. This is a dog with three heads, poison flows from its mouth, snakes wriggle around its neck, and its tail is represented by a poisonous snake. Cerberus stands guard at the entrance to the Underworld - the Kingdom of the Dead, so that the dead have no chance to return to the Kingdom of the Living. He is a servant of Hades and a guide to the afterlife.

The meaning of a Cerberus tattoo - great strength and cruelty, loyalty to your ideals... Therefore, a person who opted for this tattoo must have a cruel, firm disposition, sometimes even bloodthirsty, have a strong will and a stern character. The semantic load of such a tattoo is that its owner is an aggressive type and stands for the forceful resolution of conflict situations.

Cerberus tattoo can be performed in various styles and on any part of the body, but the constant is the presence of three heads in a dog, which indicates increased aggression, constant expectation of a threat and readiness to attack at any moment.

Photo of cerberus tattoo on body

Photo of cerberus tattoo on hand 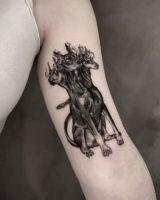 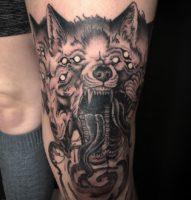 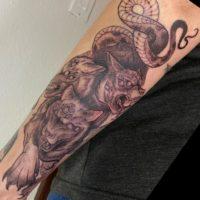 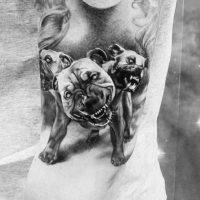 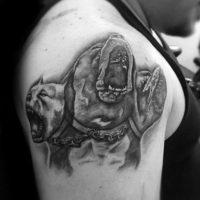 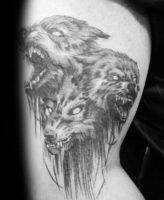 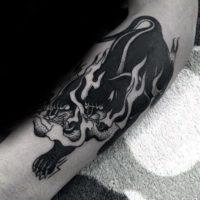