The Indians have always used tattoos as a connection with the gods, amulets and showed their creativity. The wearable images of the Aztec tribes are especially different. Their drawings are unique, full of small details. Many options, directions of tattoos can be distinguished into a separate image style. In addition to beauty, their tattoos carried a sacred meaning, brought them closer to the gods, associated with the other world. In the Aztec tribes, not only adults, but also children had images on the body. This people attached great importance to art, from a young age everyone was trained in pottery and other areas.

Aztec tattoo designs are easy to find or create. They were used in various rituals dedicated to deities.

In addition to religious tattoos, people marked their achievements on their bodies. Thus, gratitude to the gods was expressed for their help in battles, hunting, position in the tribe and other life victories.

More on the topic:  What does the firebird tattoo mean?

In addition to deities, images of eagles, warriors, symbols from the language, the moon and stars were applied to the body.

The ancient people of the Aztec tribes believed that the body has certain energy centers. These include the abdomen, chest, or arms. In their opinion, energy passes through these places and, by placing tattoos in these places, the connection with the gods is strengthened.

Nowadays, Aztec tattoos are popular not only for their meaning, but also for their unusual, colorful appearance. The image can be not only in color, but also in black and white. The large number of small parts and the complexity of the image makes the application process lengthy, often divided into several sessions.

Photo of Aztec tattoos on the body

Photo of Aztec tattoos on the arm 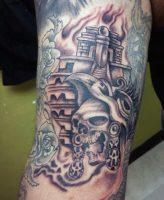 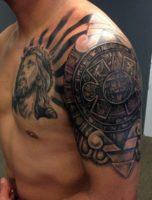 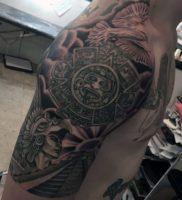 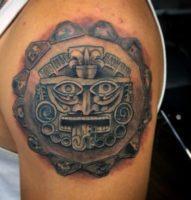 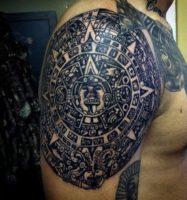 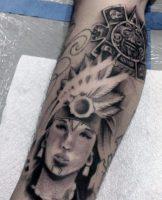 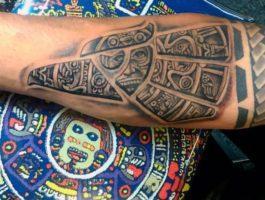