Visually, the Ankh (or Ankh) is a cross with the top in the form of a loop (☥) and, although in the modern world some attribute such an image to the Goth subculture, it is correct to associate this sign with Ancient Egypt - it is there that its roots are. The following names are often found:

As evidenced by archaeological research, a cross with a noose was often used in images of the ancient Egyptian Gods, on the walls of temples and houses, as amulets of pharaohs, nobility and ordinary citizens, on monuments, sarcophagi and even on household utensils.
According to the artifacts that have come down to us and deciphered papyri from the banks of the Nile, the Supreme Beings showed mortals a powerful symbol of infinity, which they themselves used.

The Egyptian Ankh initially carries a deep meaning: the cross symbolizes life, and the noose is a sign of eternity. Another interpretation is the combination of masculine and feminine principles (a combination of Osiris and Isis), as well as the unification of the earthly and heavenly.

In hieroglyphic writings, the ☥ sign was used to denote the concept of "life", it was also part of the words "happiness" and "prosperity".

Vessels for ablution were made in the shape of a cross with a loop - it was believed that water from them saturates the body with vital energy and prolongs a person's time in this world, and gives the dead a chance for the next rebirth.

Spread across the world

Times and eras have changed, but the "Key of Life" has not been lost in the centuries. Early Christians (Copts) began to use it in their symbolism to designate eternal life, for which the Savior of mankind suffered. The Scandinavians used it as a sign of immortality and identified it with the water element and the birth of life, the same thing happened in Babylon. The Maya Indians attributed to him mystical abilities in rejuvenating the body shell and getting rid of physical torment. The image of the "Egyptian Cross" can even be found on one of the mysterious statues on Easter Island.

More on the topic:  Daddy Angel and Demon

In the Middle Ages, the Ankh was used in their rituals by alchemists and sorcerers, healers and sorceresses.

In modern history, this sign was noted among hippies in the late 1960s, in various modern esoteric societies, in youth subcultures; he had to play the role of a symbol of peace and love, to be the key to secret knowledge and omnipotence.

Charm on the body

From the very beginning, Ankh was used not only in the form of amulets, but was also depicted on human skin. Nowadays, when wearable drawing is gaining popularity, the "bow of life" is increasingly found among tattoos. It can be either a single hieroglyph or a whole picture. Egyptian motifs, antique and Celtic patterns, Indian ornament are organically combined with a tau cross.

Now, not everyone thoroughly knows about the sacred meaning of Ankh, but this is a very strong energetic sign and it can even be dangerous to use it thoughtlessly. On thematic forums, statements are repeatedly found that not everyone will benefit from such a tattoo.

In this sense, the Egyptian "sign of life" is perfect for self-confident individuals with a stable psyche, who are open to everything new, are interested in the secrets of the universe and at the same time do not forget to monitor their health in order to delay the decrepitude of the body as much as possible. It will also be in demand among people who value harmony in relationships with the opposite sex.

Although initially the Ankh was always in the right hand of the Pharaohs and Gods, tattoos are drawn in various places: on the back, on the neck, on the arms ...

Modern technologies and professional masters in tattoo parlors will always help the client to realize his dream of a beautiful and symbolic body drawing (both temporary and permanent).

Photo of dad anh on his hands

More on the topic:  The meaning of the tattoo hare, rabbit

Photo tattoo anh on the tongue 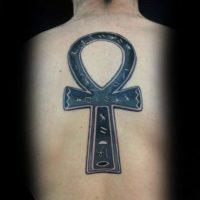 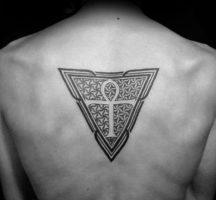 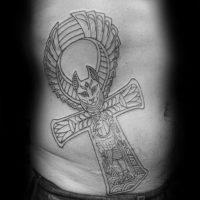 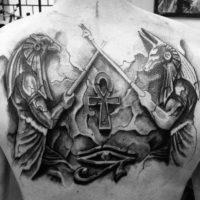 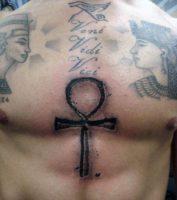 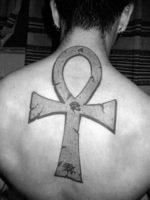 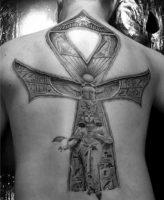