The crocodile is a predatory and dangerous animal that feels great in two elements: earth and water. In the culture of the Western countries, the crocodile means gluttony and destructive force. In African countries, the animal symbolized rebirth. Africans called the scars of boys after circumcision crocodile marks. It was believed that the reptile swallows boys, who are then reborn into the world as men.

In the Indian tribes, the crocodile was painted with an open mouth, into which the sun sets every evening. So he was identified with the helper of the gods. In European countries, a hypocritical person was compared to a reptile. In India, the predator was associated with a guide to different worlds: the afterlife and the world of life.

Despite some differences in the interpretation of the meaning of a crocodile tattoo in different cultures, this reptile has always instilled fear and danger in people. At the same time, he was revered, especially in the countries of direct residence. In addition, the crocodile is depicted on the coats of arms of some countries and symbolizes power and strength.

A person who decides to get himself a tattoo with the image of a crocodile or alligator must have such qualities as self-confidence, determination, strength, rigidity, perseverance. That is why this tattoo is so popular among athletes and leaders. In addition, she is often found among crime bosses.

A woman can also make herself a drawing of a crocodile, but it will be interpreted in a completely different way. In this case, the tattoo means maternal love, care and protection, dedication and creativity.

The image of a crocodile with an open mouth means the desire to live in this world, regardless of danger and obstacles. Swim not with the flow, but against it.

More on the topic:  The meaning of a seagull tattoo

The meaning of a crocodile tattoo with closed eyes suggests that its owner is not as simple as it might seem at first glance and able to stand up for himself... It is known that reptiles with closed eyes can still see perfectly and do not miss the chance to attack their prey, which does not even suspect that the animal is awake.

How and where are they portrayed?

A crocodile or alligator pattern is applied to any part of the body. It all depends on the size of the picture, the style of application and individual wishes.

The animal is depicted with an open or closed mouth, sleeping or awake, in color or monochrome. Every detail matters, so the customer chooses a sketch of a crocodile tattoo that will correctly reflect his temperament and character.

Photo of crocodile tattoo on body

Photo of crocodile tattoo on hand 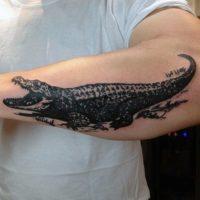 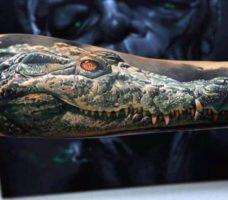 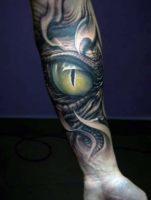 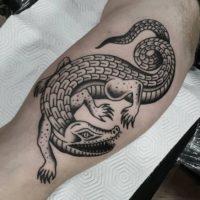 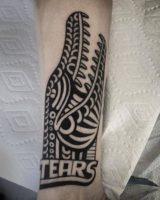 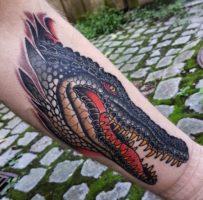 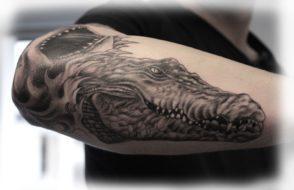 Photo of crocodile tattoo on leg 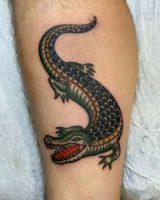 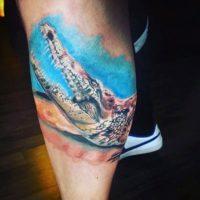 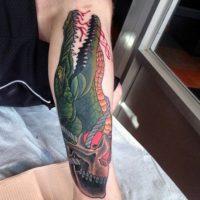 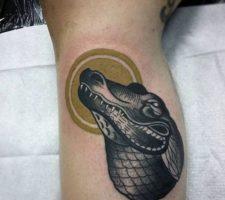 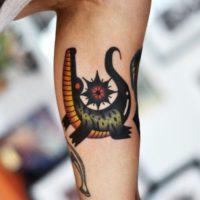 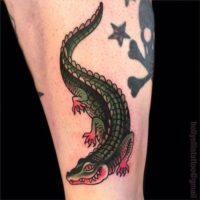 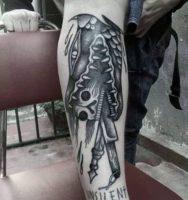 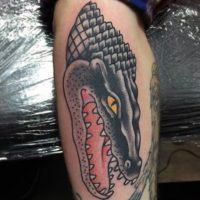