To understand the meaning of a stork tattoo, we have to plunge into the cultures and representations of several peoples, and find out how this bird is represented in the context of the history of world religions.

The meaning of a stork tattoo

Since ancient times, this bird was considered the keeper of the hearth, warmth and comfort in the house. Charms in the form of a stork were designed to give peace and prosperity to the family. The fact is that storks are practically not afraid of people and settle in the immediate vicinity of human houses. In addition, every year they return to the same place to breed. People who choose stork tattoos strive for consistency and fidelity. This is a kind of indelible amulet that will always be there.

According to Christian tradition, once God ordered the son of Eve to throw a certain bag into the sea, forbidding him to look inside. However, he was very curious, like his mother, so he could not resist and opened this bag. Inside there were vile worms and snakes, which instantly filled everything around. And then the Lord, as punishment, turned the negligent boy into a stork, ordering him to cleanse the earth of filth (which worms symbolize).

The meaning of a tattoo depicting a stork can differ depending on which culture it is interpreted from. However, the general meaning will remain unchanged: stork protects people from bad, clears the mind of bad thoughts and gives the family peace and prosperity. Some legends endow the stork with the ability to bring good luck. In addition, it is believed that storks are the harbingers of a baby, a new life.

Therefore, this bird also symbolizes the eternal renewal of life. In addition, at different times, storks were credited with:

The stork is also considered a symbol of spring, which also reminds us of renewal and birth of a new life... In the east, this bird was given to parents as a sign of reverence and respect for the older generation.

If you decide that it is the stork that should become your constant companion, then first of all decide on the place where the image is applied, as well as its size. A bird that is too small will not look very good, the ideal option is a full picture on the back or bicep.

Note that stork tattoos are usually tricky to complete, so make sure the tattoo artist you choose is experienced enough.

Photo of stork tattoo on body

Photo of stork tattoo on hand 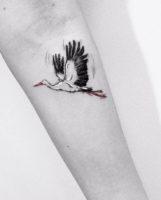 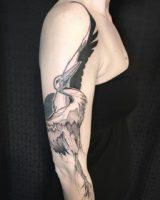 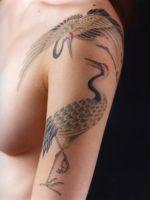 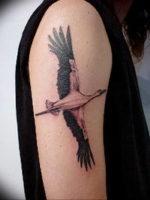 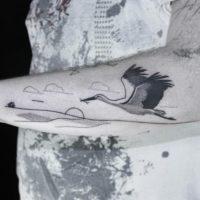 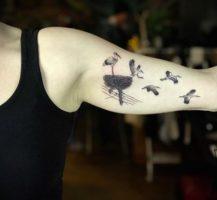 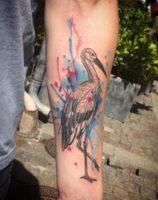 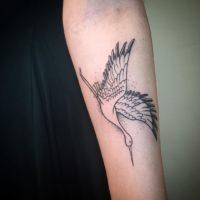