During your yoga journey, you will come across many symbols, and each of them has a special and deep meaning. And chakras are no exception! These seven energy centers in your body are represented by seven unique symbols, each with a hidden meaning.

The symbol for each chakra is composed of different images and colors, and each symbol embodies the meaning of the corresponding chakra.

This quick guide is your introduction to the hidden meanings of chakra symbols!

Here is your crash course on chakra symbols

In Sanskrit word chakra roughly translates to "wheel". The seven symbolic energy wheels in your body begin at the base of your spine and end at the crown of your head. They connect between body and mind, and mind with spirit.

Before we dive into chakra symbols, let's talk about one common element - the circle. The circle is a universal representation of the infinity, the infinite and cyclical nature of energy.

It also represents connection and oneness with oneself, other beings, and a higher purpose. Each chakra symbol includes a powerful circle as a reminder of our connection with the divine. Muladhara is the root chakra at the base of your spine and it's all about grounding. The square in this symbol represents rigidity, stability and basic energy. It provides a stable structure for the chakra system.

The inverted triangle is an alchemical symbol for the earth, which also reminds us of the grounded energy of Muladhara. The four petals in this symbol represent the four states of mind that originate in this chakra: mind, intellect, consciousness and ego. Svadhishthana is your sacral chakra, your center of creativity. The circles connected to the lotus petals represent the cyclical nature of birth, death and rebirth. Tangential circles also create a crescent shape, which is a good reminder of the connection between creativity and the phases of the moon.

Manipura is your solar plexus chakra and directly affects your self-confidence. The ten petals of this symbol connect it to the ten pranas in your body, or, for simplicity, types of air energy manipulation. You have five pranas and five upa pranas.

The inverted triangle in this symbol represents the energy of the three lower chakras, which is concentrated and energetically extended upward to the higher chakras. Think of it as an inverted funnel of earth energy. Anahata is your heart chakra and nurtures your compassion for yourself and others.

It is also a unique chakra because it is the connection between the three main chakras and the three higher chakras. This is represented by the two triangles in the center of the symbol - the upward and downward, masculine and feminine energies, mixing to create the shape of a six-pointed star.

The six-pointed star combined with the 12 petals in this symbol represents your 72000 energy channels or nadis (6000 x 12 = 72000). It also shows how Anahata is the central chakra that connects the entire system. Vishuddha is your throat chakra, it contains your ability to communicate and express your opinion about what you believe in. Like Manipura, the triangle in this symbol represents energy moving upward. However, in this case, energy is the accumulation of knowledge for enlightenment.

The 16 petals of this symbol are often associated with 16 vowels in Sanskrit. These vowels are pronounced lightly and aspirated, so the petals personify the airiness of communication. Ajna is your third eye chakra, your seat of intuition. You see the continuation of the inverted triangle in this symbol as it is the last chakra in front of your crown chakra, which is your connection to divinity and true enlightenment.

This triangle represents the knowledge and lessons of the six lower chakras that gather and expand into your divine consciousness. Sahasrara is your crown chakra or your divine connection. This symbol is simply a divine circle and a lotus flower, reminiscent of our connection with Brahma, the Hindu god of creation.

This symbol represents our divine unity with other beings and with the universe. The lotus flower represents prosperity and eternity, among other things.

How to use and activate chakra symbols

In conclusion, it is important to recognize that there are many different interpretations of chakra symbols, and this set is just one such interpretation. I encourage you to seek the meaning of any new symbols you encounter and wonder how they apply to you and your practice.

You can also realign your chakras with yoga practice. In yoga, certain postures and mantras align the chakra system and the overall flow of prana (life force) energy. When your chakras are aligned, you can live your best life!

Nadis are channels in the subtle body through which vital energy - prana - flows.

This theory has advanced greatly - some suggest that there are as many as 88 chakras in the entire subtle body. The number of major chakras varied according to tradition, but usually ranged from four to seven (the most common is seven).

The main chakras are mentioned in Hindu and Buddhist texts - they should be located in a column along the spinal cord from the base to the crown of the head, connected by vertical channels. Tantric traditions have tried to master, awaken and energize them through various breathing exercises or with the help of a teacher. These chakras were also symbolically displayed and divided into various elements such as: basic syllables (strokes), sounds, colors, smells and in some cases deities.

In the picture below we represent the location, the map of the chakras: 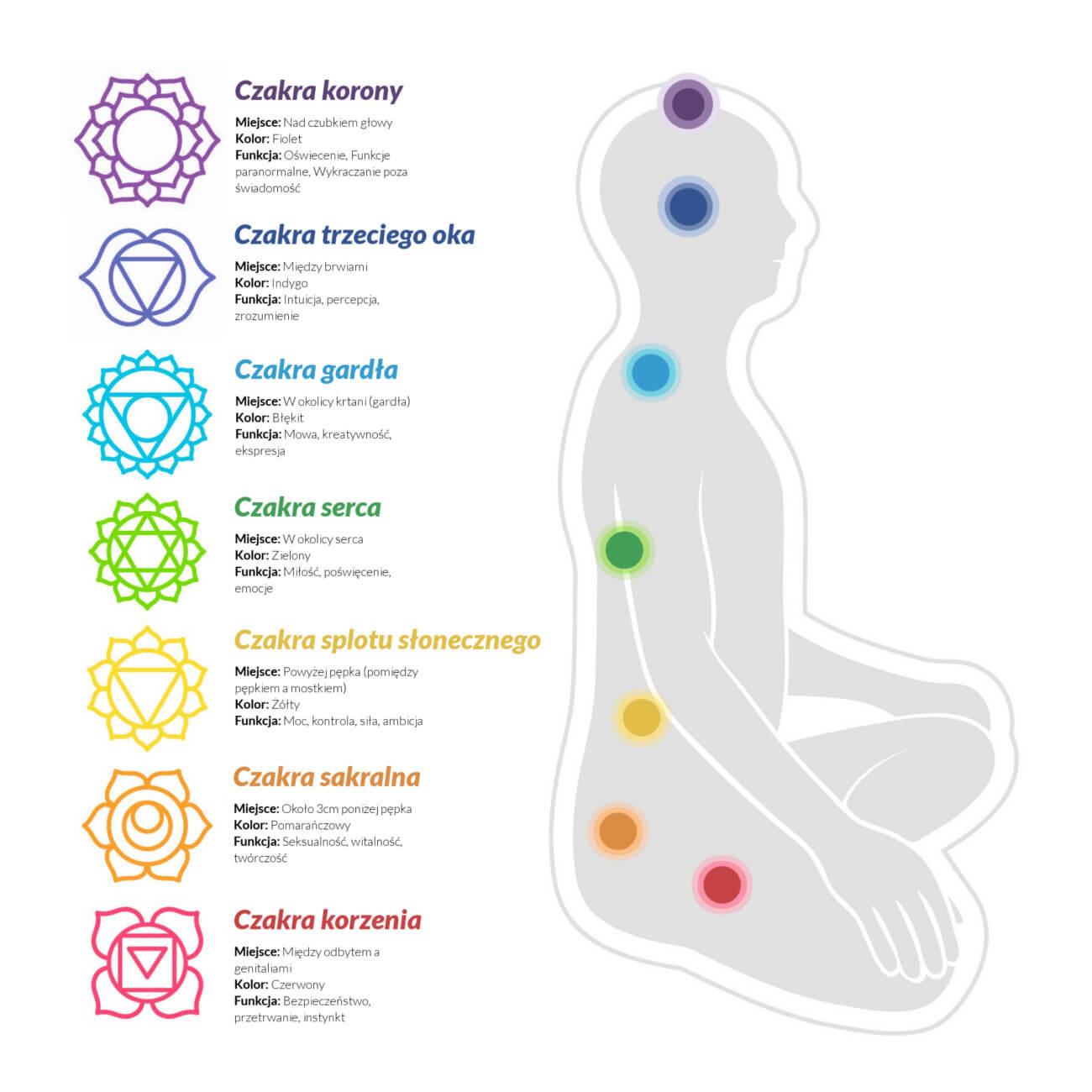 Theories of Hindu and Buddhist chakras differ from the historical Chinese meridian system (a meridian is a line connecting acupuncture points, designed to communicate with the path [channel] through which qi energy flows) in acupuncture. Unlike the latter, chakra refers to the subtle body in which it has a position, but does not have a specific nerve node or precise physical connection. Tantric systems predict that it is constantly present, very important, and a vehicle for mental and emotional energy. It is useful in some yogic rituals and in meditation to detect the radiated internal energy (prana flows) and the connections between mind and body. Extensive symbolism, mantras, diagrams, models (deity and mandala) help meditation.

Unlocking or cleansing chakras often call chacrotherapy ... The functioning of our body and psyche depends on the correct functioning of the energy points - when these points do not work properly, they can cause various types of diseases or ailments.

Below I present the most popular common chakra unblocking methods:

How are chakras related to gemstones? Like colors, the right gemstones can have a positive effect on our chakras.

Finally, it is worth mentioning the colors corresponding to each of the major chakras.