A few decades ago, a person with a tattoo on their head would have been considered a dangerous antisocial element, but nowadays, male head tattoos are a normal practice for fans of tattoo art.

Nevertheless, the choice of such a place for the location of the body pattern is still considered quite specific - not everyone is capable of this. Often people who are creative, in a word, whose work does not imply a strict dress code, do a tattoo on the head.

Pros and cons of head tattoo

It's no secret (even for tattoo lovers themselves) that a tattoo is a great way to attract the attention of conservative people in the street. Nevertheless, not all fans of tattoo art want to expose their body for everyone to see.

Body art for this kind of people is something very personal. They choose places for their tattoos that are easy to hide under clothes (thigh, back, shoulder blades, shoulders). The drawing on the head (especially the tattoo on the temple) cannot be hidden even under the headdress.

Therefore, before deciding on such a bold step, it is worthwhile to thoroughly weigh the pros and cons. After all, a fleeting impulse will pass, and then you can seriously regret your thoughtless act. Modern technologies, unfortunately, still do not allow removing unsuccessful tattoos completely: a bright picture will still remain.

However, there is another solution for unsuccessful tattoos on the head - they can easily be hidden under the hair. The exception is balding people who want to divert attention from an unsightly picture with the help of a drawing - their fairly thinned hair.

More on the topic:  The meaning of the infinity tattoo

There is another great way out for bald people: a tattoo of hair on the head. It is no secret that many men suffer from hair loss in adulthood. Many of them have a complex about this, but hair transplantation is not a cheap pleasure, even not all Europeans can afford this procedure, the cost of which amounts to thousands of “evergreens”.

But here a tattoo on the head for bald ones comes to the aid of desperate men. The specialist makes a tattoo on the bald head, the appearance of which resembles a very short "hedgehog". The cost of this procedure is several times less than the cost of a hair transplant. The great thing is that such a pattern is no different from the usual men's short haircut, which is a real salvation for elderly balding men. Nevertheless, the skin on the head is very sensitive, which means that it will be quite difficult to endure the application of such a tattoo.

A tattoo in the form of a bright colorful flower will undoubtedly beautify any girl, regardless of the place of its application. Especially popular for this kind of work are tattoo techniques such as watercolor и realism... For example, red rosebuds will perfectly complement your look in summer, and in winter you can grow your hair, hiding your drawing from prying eyes.

Winged expressions in Latin, executed in an ornate font, are definitely very popular among the beautiful half of humanity. The most popular places for inscriptions among girls are the forearm, wrist, shoulder blades, and the outer side of the foot. Extraordinary and strong personalities may dare to stuff something like this behind the ear or on a shaved temple.

Works of this kind are mainly the prerogative of girls from informal circles, namely, fans of the steampunk style. Drawings in the form of complex mechanisms and intricate gears will look great on the shaved temple of a steampunk fan. Often such tattoos are a great addition to a bright mohawk.

More on the topic:  Male and female rib tattoos

Ornamental tattoo style - one of the most ancient. European sailors had the pleasure of contemplating such tattoos on the Polynesian natives. Ornamental drawings are usually not distinguished by a riot of colors. Often they depict animals, flowers, bizarre patterns. Another characteristic feature of the ornamental design is clear contour lines. There are many fans of this ancient and unusual style in the world. These tattoos look great on any part of the body, even on the head.

To dare to get a tattoo on your head, you need to be a truly strong person. As a rule, the essence of such people invariably breaks out, which is expressed in an extraordinary appearance. For this reason, images of animals are very popular among strong and strong-willed girls, the characteristic features of which reflect their essence. The most favorite sketches corresponding to this theme are predatory fish, wild cats, dogs.

Plots of male tattoos on the head

Hyperrealism style or 3d tattoo gained popularity only at the beginning of the XXI century, when technology began to allow to depict on the human body such miracles as three-dimensional drawings of animals, "living" portraits of people. A popular theme for male head tattoos is a huge eye on the back of the head, made in hyperrealism. Such work will undoubtedly make others pay attention to you.

The Maya believed that this kind of body art meant the connection between the soul and body of a person. A characteristic feature of tribal tattoos is the intricacies of wide black lines with clear contours. In a similar style, not only abstract patterns were depicted, but also animals, mythical creatures, and plants. When a man sees a tribal tattoo on a shaved temple, ancient warriors and hunters immediately come to mind.

Admirers of biomechanics are even more common among men than among girls. Only guys usually go much further, wanting to shock the conservative public as much as possible. They combine steampunk with realism, as a result, we can observe a completely believable cut of the skin, from where numerous gears "look out".

More on the topic:  Bicep tattoos

The zombie theme has been and remains one of the most beloved among horror and fantasy fans. Particularly popular is the rather natural image of the brain on a bald head, which gives the impression of a cut skull. Such a topic is definitely not for the faint of heart, but for the most desperate nonconformists who want to terrify others at all costs.

The East, as they say, is a delicate matter. But modern amateurs do not care about self-expression. In recent decades, it has become fashionable among Europeans to depict images from Japanese mythology. It is worth paying tribute to domestic craftsmen, such works look very beautiful and unusual. Bright dragons, mythical fish, geisha - all of this refers to traditional oriental-style plots.

A tattoo on the head is considered the most painful. Therefore, it is extremely important to weigh the pros and cons before deciding on such a responsible step. In this case, you should have at least some idea of ​​the peculiarities of pain perception by a particular person. The cost of such work depends on the style of the drawing, its size and level of complexity. As a rule, the quality determines the price. The work of a well-known, well-established master cannot be cheap. 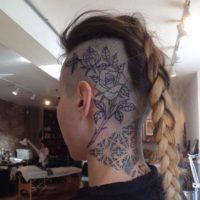 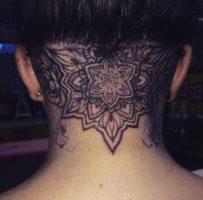 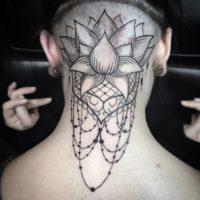 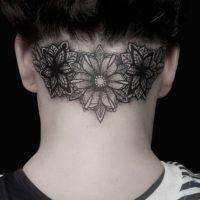 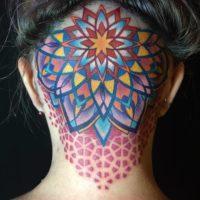 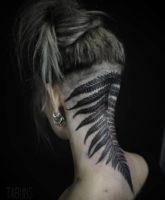 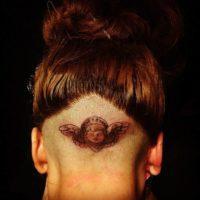