The tradition of decorating hands and fingers began thousands of years ago. Today, when various signet rings and rings have not lost their relevance yet, they no longer satisfy the desire for self-expression.

Therefore, in our time, a relatively new direction in tattoo art is rapidly gaining popularity - a tattoo on the fingers.

Of course, it is new only relative. In prison symbols, there are a lot of tattoos on the hands, including the fingers. Therefore, if you are wondering what the tattoo on the finger of a stranger in the subway means, perhaps you should not ask him about it. Better to read about them in separate article.

In part, the tradition of hammering fingers has military origins, where for a long time it has been customary to put letters and words on this part of the hand, denoting names or nicknames.

Even without much digging, you can guess that only a very small tattoo can be applied to a finger. Given the elongated, elongated shape of this part of the arm, it is not surprising that the vast majority are inscriptions... In general, this is not such an easy place. Girls tend to prefer a tattoo between the toes.

This is a rather original solution, since such a tattoo is almost invisible from the side. For guys, letters and inscriptions on the front, open, part of the finger are more popular. This fashion is extremely developed in hip-hop culture, although it has parallels with army and prison tattoos.

Each inscription, regardless of the part of the body on which it is located, has its own meaning. Oddly enough, most people prefer to apply phrases in Latin, English and Arabic, less often - in Russian.

Any symbols that do not have deep meaning, but rather serve as a means of decoration, are considered an equally popular option for tattoos on the fingers.

Examples of such works are signet rings, rings, crosses, stars, and so on. Of course, the owner of such a tattoo puts a certain meaning in it, but such images, as a rule, do not have a universal meaning. It is especially possible to single out the recently widespread mustache tattoo... This funny youthful attribute doesn't really matter either.

Before summing up, I can add that the process of tattooing a finger is an almost painless and quick exercise due to its size. So, if you like this particular place, it's time to choose a suitable sketch.

Photo of tattoo on fingers 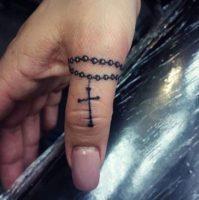 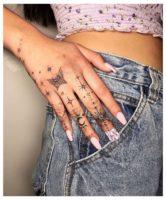 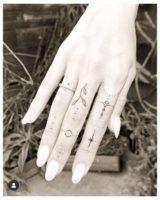 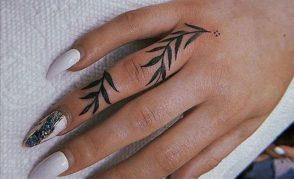 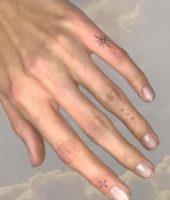 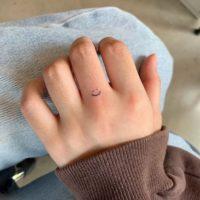 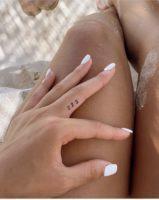